J is for JAALI CHIPS

J is for Jaali Chips.

After a one-week break (last weekend being too hectic for me!), this series continues with the letter "J". My favorite "J" word is a tropical fruit called jambool (jamun in hindi and java plum in english). This little one-seeded berry is deep purple in color and as a kid, the best thing about eating jambool was the bright purple tongue I could sport for hours later! Later, getting my Bachelors degree, we had to learn to make wine in Biotechnology class (no,really!) and I remember making tons of amazing jambool wine. Now there was an experiment with a happy ending!
Another great J is jardaloo or dried apricot. The dried apricot is tasty to eat by itself, but the best part is the tiny kernel hidden inside. You eat the outside and end up with a hard seed. Then you go into your grandmom's kitchen and root around for something heavy, like a pestle, then crack the seed to get the *tiny* kernel out and eat it. A lot of work but so worth it!
Two other very important J's are both spices: jaiphal or nutmeg and jeera or cumin. Cumin is one of my favorite spices, bringing a warmth to every dish. Cumin is being investigated for its anti-cancer properties and by all accounts, this is one spice you should eat a lot of!
The sweet delight of J is jalebi. In my home town of Kolhapur, jalebi is associated with patriotism! On two days of the day, 26th January ( Indian republic day) and 15th August (Indian Independence day), little jalebi stalls sprout all over town on every street corner. We would gorge on jalebis on these two days. The other occasion associated with jalebis is weddings...the traditional Marathi wedding lunch would be incomplete without a serving of this sweet at the end of the meal. These wedding jalebis are served with a type of lassi or spiced buttermilk called "mattha". Recently, I got to "virtually" enjoy some amazing jalebis made by Bilbo and Shammi.
But the dish I made for J is none of these...I am making jaali chips translated as "mesh chips". These are potato chips cut into pretty meshed slices. During summer, my mom would make slice kilos and kilos of potatoes into these chips and dry them on the rooftop under the blazing sun. Once these are completely dry, they can be stored indefinitely and many times during the year, small amounts would be fried to a crisp and eaten as snacks. These pretty chips were a favorite for me and I decided to make them from scratch. This being November in the Atlantic north-east, there is barely any sun around at all, let alone the blazing sun required to dry these babies. So I simply cut the chips and cooked them, to eat as a one-time snack. Taking a cue from Nic and her discovery of microwaved chips, I nuked them instead of frying them! You do need a mandoline for this one though. Mandolines can be very expensive in US stores, but my Indian one costs less than 2$. Such a great tool to have on hand!
Jaali Chips 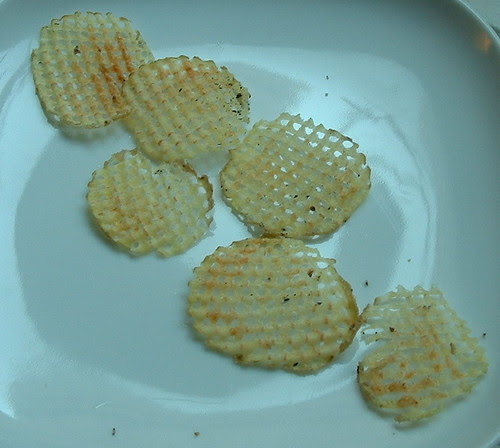 For a plateful of chips, you need
1 large baking potato, scrubbed clean
salt and pepper to taste
oil spray
Method:
1. Using the wavy (crinkle) side of a mandoline, slice the potato once, then turn the potato 90 degrees horizontally and cut again. This criss-cross way of cutting results in hatched (meshed) slices.
2. Place the slices on a microwave-safe plate sprayed with oil spray, in a single layer.
3. Microwave for several minutes (6-8 minutes) till chips are lightly browned and crispy.
4. Sprinkle with salt and pepper.
An easy and yummy snack!