I is for IMPERIAL COCKTAIL

I is for Imperial Cocktail.

I is really a hard Marathi food letter. The only authentic recipe is a fried jalebi-like sweet called imarati. I confess that I have never eaten it and don't have a recipe either, so this is something I need to taste on my next visit to India. Other "I" foods names exist in Hindi, like imli or tamarind and ilaichi or cardamom but the Marathi terms for these foods are different: "chinch" and "velchi" respectively, not "I" words at all. So I settled on a dessert that has a cult following in my home-town of Kolhapur: Imperial cocktail.This is not a drink as you may think, but a colorful and exotic ice cream sundae. I think the "cocktail" may be an actual reference to a colorful rooster tail. The name "imperial" probably comes from this Kolhapuri love for royalty: one of the hallmarks of Kolhapur is that it was ruled by a royal family for centuries, and even in the era after Indian independence, Kolhapur's royal family is well-beloved and much respected.
Ice cream is not a traditional Indian dessert, so how did a small town like Kolhapur become famous for its ice cream. The answer comes from the days of British rule in India, and how an enterprising businessman obtained a soda machine to provide refreshments to foreign soldiers. This article tells the interesting story of this ice cream store.
My memories of this ice cream go back many many years...a visit from out-of-town guests would be incomplete without a pilgrimage to Imperial for the "special cocktail". Imperial is a tiny unassuming store-front in the heart of the city near the Mahalaxmi temple, and walking in through the doors transports you to another age, of slowly rotating ceiling fans and a rickety wooden staircase that takes you to a tiny upstairs seating area. The menu has plenty of variety, with sodas and single scoops being the most inexpensive choices and the cocktail sundaes, the most pricey ones. For some strange reason, the regular cocktail came with a layer of sponge cake, and the special cocktail came without. We always chose the special because I remember that the cake would often be none too fresh. The ice cream came in a tall glass, layers and layers of fruits like chikoo and apple, bits of candied fruit called tutti-frutti, small cubes of multi-colored jelly, hand-churned ice cream in flavors like rose and vanilla, and the whole stuff drowned in a yummy mango milkshake and topped with nuts. A special cocktail is a meal in itself and the trip to Imperial would keep me happy for weeks! So in a tribute to that wonderful creative sundae, I tried to make it myself:
Imperial Special Cocktail 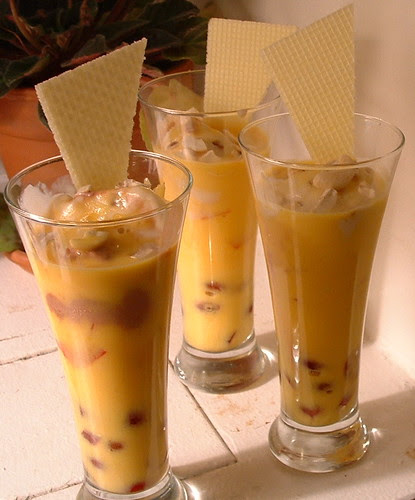 Makes 4 servings
Ingredients:
1 cup chopped mixed fruits (apples, pears, oranges, grapes)
1/2 cup canned mango puree
1 and half cup milk or soymilk
4 scoops vanilla ice cream
4 scoops other flavor ice cream (rose/strawberry/raspberry/chocolate)
4 tbsp chopped cashewnuts
4 wafer cookies, cut diagonally into triangles
Method:
1. Mix canned mango puree and milk to make a mango milkshake.
2. In a tall glass, layer 1/4 cup of fruits. Top with a scoop each of vanilla and other ice cream. Pour on 1/2 cup mango milkshake. Top with 1 tbsp cashewnuts and a wafer cookie triangle.
The verdict: This is a poor imitation of the real thing, so if you get a chance, go to Kolhapur and try it for yourself! But its a tasty sundae all the same, and very easy to put together. Give it a try, and meet me next week for a look at the letter "J". See you then!
.