Its the weekend, time for Weekend Dog Blogging! Do head over to Sweetnicks and check out the canine beauties! 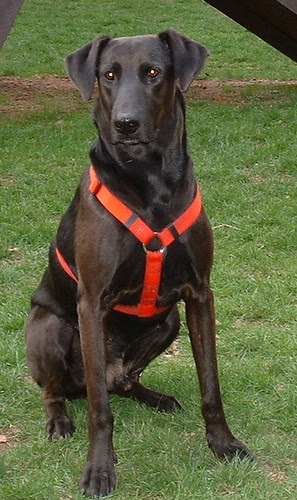 Dale is officially my fiance V's dog and he has an interesting story to tell...I thought some of you might like to hear it so here goes: V has wanted a dog all his life, and decided to get one as soon as he could. In September 2001, the World Trade Center attacks caused an overflow in the NYC animal shelter system due to many homeless pets, and people were being urged to adopt animals so that more could be accomodated. So the time had come...V made a bee-line for the ASPCA and I went along with him to help choose a dog. V fell in love with one of them right away, a big black dog who was curled in his cage and made whimpering "take me home" sounds. The note on his cage said that the ASPCA had named him Dale and that he was had been rescued from an abusive owner a few months before. Enough said. The formalities were done and Dale was brought home.
A month later, V got a rather startling call from the Discovery Channel network Animal Planet asking if they could come film him with his new pet. "I guess", V said uncertainly, not quite sure what this was all about. It turned out that Animal Planet was doing a show called Animal Precinct tracing the stories of rescued animals. Dale had been tracked from the time he was rescued to his time in the ASPCA and now with his happy ending in a loving home. Well, they filmed V and Dale and left and we never heard from them again. V does not get Animal Planet on his cable TV so that was that.
A few weeks later, people on the street started recognizing V and Dale when they were walking outside. People would stop and say "Omigod, you're that guy and dog from that show, man, that story is so amazing". We did not know the story ourselves! Then a lady at the dog run graciously called some friends and got them to send us a tape recording of that episode, Episode #16 in Season 1. When we saw the show (finally, after everyone else had seen it), it was shocking beyond words. It turns out that Dale and a bunch of other dogs were neglected in a backyard in Queens, a borough of NYC. Dale had a huge tumor the size of a grapefruit hanging off his neck. This was all shown graphically in the show. ASPCA officers rescued the dogs. When asked about the abuse, the owner did nothing but shrug. A wonderful vet over at the ASCA surgically removed Dale's tumor, luckily a benign one, and saved his life. Its a very touching show and I am told that they show re-runs all the time, so maybe some Animal Planet watchers will catch it sometime.
What a journey this dog has been on! Today, Dale is a proud dignified dog as you can see for yourself. He put on 20 lbs since V got him, his coat is glossy black and healthy. Dale has learnt to trust and love people again, and learnt to play well with other dogs. V lavishes him with love and care that we hope makes up for the sad abuse he went through earlier. We are so grateful to the ASPCA for saving his life! They are doing so much good work, and I hope many of you will consider making a small contribution to them and helping them save more of our best friends.
Posted by Nupur at 5:32 AM