This article is first of a special series called "The A-Z of Marathi food". India is the land of diversity. Each of the 28 states in India has a unique cuisine but the Indian food served in restaurants represents only a tiny fraction of our culinary heritage. I come from the western Indian state of Maharashtra. Capital: Bombay (Mumbai.) Population: 96 million (only 11 countries in the world have a population higher than Maharashtra.) Language: Marathi. Traditional Marathi food is earthy and humble, diverse and very tasty. It also remains relatively unknown to those outside the state. It's time to change that. I invite you to join me on an alphabetical culinary tour of my home state. We will go through the letters A to Z and make a dish with each letter to showcase the cuisine that I grew up on.

A is for Amti.
Every evening, in millions of homes in Maharashtra, the following dinner is served: Amti-Bhaat-Bhaji. Translated as lentil dal, rice and vegetable. So amti is the special way of preparing lentils or dal in Maharashtra. Amti is a little spicy, a little sweet and a little tangy. The word amti can also used to describe other curried preparations, but the amti dal stands solid as the pillar of everyday food, making it a perfectly fitting start to our food journey.

Amti is a good illustration of the generous use of jaggery or unrefined sugar in Marathi cooking. Sugarcane is a very important crop in that part of the country and jaggery is produced and used in abundance, lending a slight sweetish tinge to savory foods.
Amti is a very basic dal and only requires a spice mixture that can be easily made ahead of time and stored. Last time I visited my hometown of Kolhapur, I visited a friend of my mom's. As luck would have it, she was grinding a huge batch of amti masala for herself that morning and when she asked me if I would like some, I said "yes, yes, yes" very quickly before she could change her mind, and got myself a hefty bag of wonderful authentic amti masala. How's that for good timing? For my readers, here is a amti masala recipe from a Marathi masala handbook. 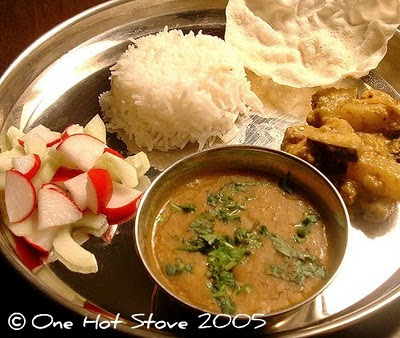