Bombay- now there's a city that loves tucking in! A teeming metropolis of about 20 million people (bigger than most European nations), it makes even New York City feel like a sleepy little town! At any point in time, millions of Bombayites are out in the streets eating. Even at midnight (especially at midnight), hordes of people crowd at little restaurants and roadside stalls to tuck into spicy chaat and crispy dosas and creamy fruit-flavored kulfis and above all, pav bhaji.

Whenever I visit Bombay, the main item on the agenda is : Eat Sukh Sagar Pav Bhaji. Sukh Sagar is a little restaurant near the Chowpatty beach in South Bombay, and it serves simply the most awesome snacks, the likes of which evoke feelings usually reserved for religious epiphanies.

What, then, is Pav Bhaji? It is a spicy vegetable stew that you sop up with pillowy bread. The pav bhaji chef (bhaiyya) stands at the mouth of the restaurant with a huge cast-iron pan in front of him. He is surrounded by bowls of chopped veggies and an alarming number of packets of Amul brand butter. The bhaiyya will start sauteeing the veggies together with boiled potatoes, spices and enormous dollops of butter and mash the whole mixture into a sizzling vegetable dish. He will then serve this bhaji with rolls of bread called pav that have been likewise drowned in butter. The final touch: the dish is topped with raw onion slices and lemon wedges. The whole mess is simply heaven on a plate. Or a heart attack on a plate, depending on your point of view.

Which brings me to the misery that overcomes people who move out of Bombay and would have to fly 24 hours to get to our beloved Sukh Sagar. What do we do? The best solution would be to catch the next flight out of JFK but an alternative solution is to make pav bhaji at home. Every Indian store sells pav bhaji masala, a dry mix of some 18 or so spices. The method is simplicity itself: saute onions and ginger-garlic, add veggies and boiled potates, tomato and pav bhaji masala; then taste it and wail about how it is not like Sukh Sagar's. It tastes OK but is just not the real McCoy.

I lived my life in sub-standard-pav-bhaji-hood, until last December. That's when I was visiting my parents and my Mom's close pal Aunt Madhuri dropped in with some home-made pav bhaji for me. I was like "yeah, thanks" because, you know, Auntie M is an amazing cook, but is hardly the Sukh Sagar Bhaiyya. Then my mother started reheating the pav-bhaji and I started jumping for joy...the aroma was exactly like that of the genuine article. And it tasted so darn close too! I accosted Aunt M and wheedled the recipe out of her and was dismayed at how plain and simple (and almost wrong!) it sounded. She insisted that onions are not to be sauteed for the bhaji (what!!) because they lend a sweetish non-authentic flavor. Her method used a lot of cauliflower which again seemed totally wrong. She used Everest brand pav bhaji masala so anyway, I bought a couple of packets and returned to NYC.

Once here, I barely waited for the jet lag to subside and then set out to make pav bhaji exactly as per good ol' M. The whole time I was making it I was pretty sure it was going to be a disaster (I wondered bitterly if M was protecting her culinary secrets by giving out bogus recipes) but I persevered and suddenly at the last stage of cooking, there was a miracle: my kitchen smelled like, you guessed it, Sukh Sagar. Hallelujah Hallelujah, praise to aunt Madhuri and her pav bhaji recipe. Here it is, for about 4-6 servings. 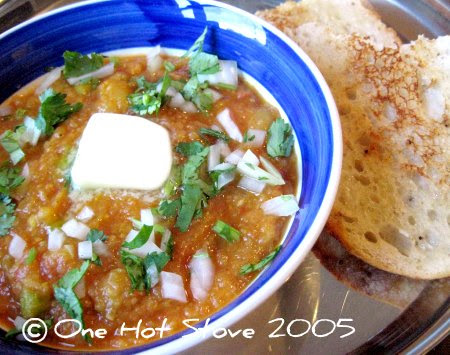 You have to keep tasting and adjusting salt, masala and tomato till you like the balance between the tomato-ey tang and the heat of the masala.

Serve with:
1. More pats of butter (as much as you can dare really, don't be chicken now),
2. Finely sliced/ chopped onions, minced cilantro and wedges of lemon. 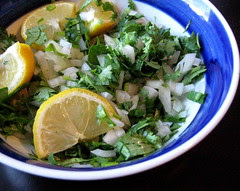 3. The genuine pav-bhaji is served with real Bombay laadi pav...slabs of bread, so named because the rolls are sold as entire slabs and you break the rolls off as required. This bread is so yeasty and terrific! I serve it with any crusty bread that is chewy on the inside, like ciabatta or country boule or French rolls. I don't recommend burger buns at all...they are too soft and pasty. Try and find "real" bread in a bakery :)

Variations:
1. Fry the bread in some butter first. For an even spicier result, make masala pav...melt some butter in a skillet. Sprinkle pav bhaji masala in it, then fry the bread in this spicy butter until sizzling and golden.
2. To make cheese pav-bhaji, top the pav bhaji with some shredded cheese. In India, the brand used is Amul cheese...in the US, Monterey Jack cheese comes close to this. Or try Cheddar. (Thanks Anon, for reminding me of this variation)
3. Some readers have suggested frozen mixed vegetables to increase the veggie content of the pav bhaji. I think beans and carrots would work well.
4. A reader named Manasi suggests the addition of some garam masala to the bhaji to give it an even more authentic taste. She also recommends MDH brand pav bhaji masala.
5. Another anonymous reader suggests adding Priya's Tomato Garlic Pickle for added pizzazz.

I hope you enjoy this taste of Bombay! I thank everyone who has tried this recipe, and takes the time to leave their valuable feedback, often with great suggestions and variations.
Posted by Nupur at 5:11 AM