Birthday pancake & cake, and an improv chutney for idlis

Our son turned 4 this month- our little guy with the big and boisterous personality. He loves water play, books and watching "scary and creepy" shows, can't recognize alphabets yet but knows the names of about 40 different Pokemon, insists of wearing only muscle shirts in summer, competes ferociously with his big sister and declares "I need something sugary" a couple of times a day. So he got two sweet treats for his big day.
We kicked off the birthday with an early morning pancake breakfast- the pancake in this case was a skillet pancake adapted from this recipe, with 3/4 of all-purpose flour replaced with whole grain atta, sugar reduced to a scant 1/4 cup, and a handful of chocolate chips instead of berries. The grandparents, aunt, uncle and cousins all joined in on Zoom to sing happy birthday. Just don't be like me and place candles into a hot skillet pancake; I had to pull them out hastily after this picture was taken because they started to melt! 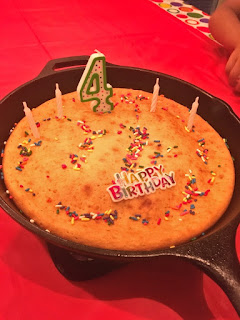 Later in the day, his sister and I made an official birthday cake. When asked about the flavor and type of cake, the birthday boy had one singular request- he wanted sprinkles, lots of them, inside and out. Done!
We made a sweet little funfetti cake using this recipe. I just realized that the recipe has been updated since I used it. I made the old recipe, which is in the notes in the linked recipe. My only changes were to use 1/4 cup granulated sugar instead of 3/4 cup, and to reduce sprinkles to 1/2 cup. Our cake baked up in about 22 minutes, much quicker than what the recipe says.
For the frosting, instead of the buttercream in the recipe, we made a chocolate ganache- warming 2/3 cup of heavy cream, then adding in 2/3 cup of chopped dark chocolate off the heat and letting the mixture cool before whisking to a smooth, thick paste. Big sissy laid on the frosting and the sprinkles. The amount of frosting was more than enough for this cake- and psst, leftover ganache frosting is basically chocolate mousse and can be eaten straight up with a spoon.
I'm one for easy birthday cakes at the best of times, but at this particular time, there was something very endearing about a little cake with colorful sprinkles hiding in every slice, with a shiny chocolatey frosting and more sprinkles on top. It really captured the simple joys of life and buoyed my spirit, while making a little boy very happy. I never thought a funfetti cake (fake food colors yadda yadda) would be my thing, but I have to admit that a slice of this soft and tasty cake was perfectly delightful with a cup of chai. 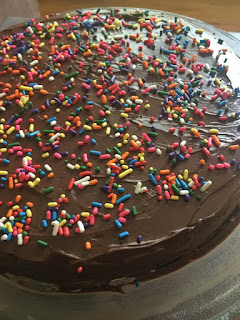 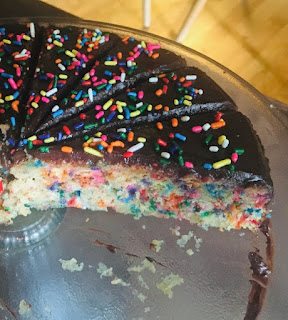 * * *
A favorite food of both of my kids is idlis. Those fluffy dumplings smeared with ghee, what's not to love? It took me years to nail down my idli protocol and I never, ever mess with the idli recipe now I have it working right. Idlis may be traditional but chutneys have plenty of room for improvisation. This time I had an over-ripe tomato to use up, and lots of onions in the pantry, so I made an onion tomato peanut chutney. To add to the improvisation, instead of regular red chillies, I used dried Mexican pasilla peppers, large wrinkly peppers that have a fruity and smoky taste and are not overly hot. 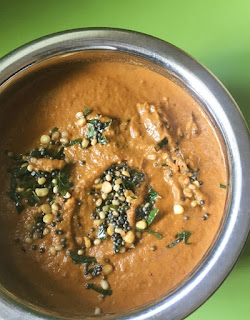 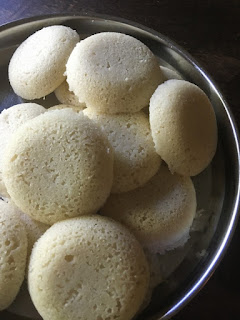 * * *
My reading these days is in fits and starts. I started a new job this month, one that is technical and challenging for me. At the end of the day I have very little mental bandwidth to take on demanding books and am usually grasping for an escape. The New Yorker issues arrive in the mail weekly but often I just can't bring myself to read yet another article about the pandemic or corrupt politicians or climate change. It all just weighs on the mind. (When I do pick up the magazine, I always find really interesting- if mostly depressing- articles to read, like this recent one about an online literature class reading the 1866 Russian novel Crime and Punishment and how its larger theme of societal decline resonates even today.)
One book did give a longed-for mental escape recently: The Satapur Moonstone- the second Parveen Mistry novel by Sujata Massey. I picked it up for the Read Harder Task #7: Read a historical fiction novel not set in WWII. The year is 1922 and we are in British India. Parveen Mistry is Bombay's first lady lawyer, young and plucky. In this atmospheric novel, I joined Parveen in her long journey on a palanquin through dense woods to the rural heart of a princely state, to a circuit house and a palace. A most enjoyable read.
My daughter worked her way through the whole Harry Potter series this summer. While I never was a big Harry Potter fan, I did read the books when they came out back in the day. I remember reading the last book when it came out and thinking that it was really dark; the scenes with Harry and friends hiding out in a tent, fighting in isolation, stayed with me. I re-read Harry Potter and the Deathly Hallows with my daughter- not reading aloud, but reading in parallel with her. I enjoyed the book much more the second time around. Again, it was a good escape into another world and one in which terrible things are happening but everything works out in the end.
For Read Harder's Task #13: Read a food book about a cuisine you’ve never tried before, I read a book of food essays, You and I Eat the Same: On the Countless Ways Food and Cooking Connect Us to One Another. It fit the theme because it had an essay about the cuisine of Anatolia, which is something I can confidently say I have never tried before. But there are a dozen really interesting essays in this book. There's one titled, "There is no such thing as a non ethnic restaurant" which about says it all. There's one about how everywhere you go, you can find meat (and other things) wrapped in flatbread, and another about how everywhere you go, you can find food steamed in leaves. A few essays profile immigrants starting restaurants- "Curry grows wherever it goes". The last essay was fascinating, about coffee bean production by small farmers in Rwanda.
What are you cooking and eating and reading? I hope everyone is staying healthy and safe.
Posted by Nupur at 5:54 PM