Have you ever watched those "Where are they now?" TV specials where they track down the cast of some popular show from a bygone era and catch up on what the actors are doing decades later? I've been playing the "Where are they now?" game with about 40 of my high school friends. A couple of months ago, we had a virtual reunion on a group text messaging app. Before then, I had only been in touch with about 4 of them. So to suddenly hear dozens of old friends chattering away now on a daily basis, after a passage of over two decades, is wonderful and disorienting. With every photo, I gasp and marvel at pictures of smiling, confident women (yes, all women, I went to an all-girls' school), often posing with partners and kids, and remember them vividly all the way from the cute early grades to the gawky teenage years. Now some of us are mothers to teenagers- how is this even possible?! Where does the time go? And are you officially middle aged when you start saying things like where does the time go?

From our graduating class in a small town, we now find ourselves living very diverse lives across the globe. In this unsettling world we live in, it is truly a blessing to know that old friends are only a text away and I am waiting to see them all in person as we cross paths during our travels. Groups chats are a funny thing- there are the constant streams of good morning messages (with requisite pictures of baskets of flowers and landscape scenes) and birthday and anniversary greetings (with requisite emojis of bouquets, cakes and confetti) plus random inspirational videos, quotations and forwarded jokes that I would rather do without. But we always welcome enticing pictures of food accompanied by recipes. One friend posted a video titled 15 most loved dishes in Kolhapur and it set off mad cravings in the group for some assal (true blue) Kolhapuri food. 7 of them are mutton dishes- that's nearly 50%! But what can I say? That percentage is an accurate reflection of the truth. Vegetarians like me are regarded with pity in Kolhapur.

Right after watching the video, one of my friends (now a Mumbai resident) changed her dinner menu and immediately made #14 on the list in the video- akkha masoor or whole lentil curry. She shared her recipe and several of us in the group made it in the days following- a tasty meme, so to speak.

My classmate's recipe is interesting, in that it is very heavy on onions, indeed, it has very little but onions and masoor. Her lovingly hand-written recipe (see the picture) calls for 7-8 onions which sounds like rather a lot, but these are the smaller, typical shallot-like onions found in India. A classmate in California piped up and said that the onions she buys are 2-3 inches wide, so should she be using that many? Which immediately led other classmates to rib her, "You never even brought a ruler to school, and now you're taking one to the market?" This is what you get with old friends. 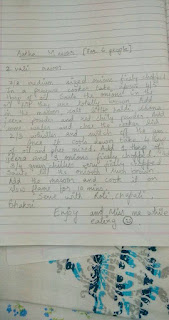 Here is the recipe, adapted to my kitchen. There are many ways of making this dish, and this onion-heavy, tomato-less, no-coconut variation is new to me. We enjoyed it very much. 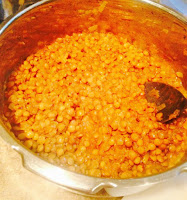 Heat 3-4 tbsp. oil in a pressure cooker. Fry 2-3 finely chopped onions in the oil until browned and caramelized. Add the soaked masoor, salt, turmeric, red chili powder, cumin and coriander powder, all to taste. Add 2-3 cups of water and pressure cook until masoor is tender.

Tempering: In a small pan, heat 2 tbsp. oil and 2 tbsp. ghee. Add 1 tbsp. cumin seeds, 2 finely chopped onions and 2 finely chopped green chilies (or to taste). Saute until the onions are browned, then add this mixture to the cooked masoor and simmer for 10 minutes.

Are you in touch with your school friends?
Posted by Nupur at 7:34 PM