On the Run, and a recipe for Carrot Raita Dip

I heard a whoosh and Summer 2015 sped by before I knew it. For our family, the last couple of months went by in a blur- the guest room was solidly booked with visits from parents and friends, we spent a week in Minneapolis to see my sister with the requisite afternoon at the Nickelodeon theme park (my kid is an adrenaline junkie, much like her daddy and totally unlike me). Then we went on a 1600 mile road trip (over just 5 days!) for a reunion with old friends. Plus I've had a pretty big change in my schedule when I switched back to working full time a month ago. 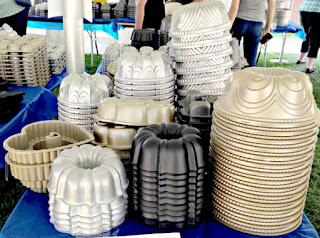 A fun shopping trip on my travels: Nordic Ware, the baking ware manufacturers, have their factory right in the middle of Minneapolis. Last year, I spotted it but we couldn't get off the highway right then and missed going there. This time I dragged my mom and sister to the Nordic Ware factory store and we lucked out. They were having a giant tent sale- their first in a decade. Oh, the excitement of being surrounded by stacks of baking pans in every shape and size. Like being a kid in a candy store, only better. I restrained myself and only bought two pans: their classic bundt pan and a rose-shaped muffin pan. 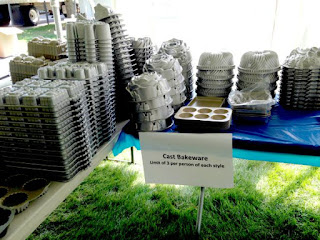 At home, the kitchen was constantly busy but I never paused to try anything new or different- it was easier to trot out old favorites. I do have a recipe to blog about, though. We met up with friends for a potluck with the theme of "salads"- which seemed appropriate for August but in fact it turned out to be a rainy and cool evening. I was asked to bring an appetizer and made something very familiar but in a newish avatar- carrot raita served as a dip with chips. 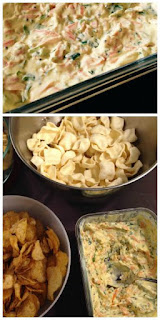 I used tender curry leaves and minced them, so you don't have to pick out the leaves from the dip. A touch of chillies would be a nice addition for those who can handle the heat. Cucumber, beet or radish, even greens like spinach or kale would work well in place of the carrots.

1. Heat 2 tsp. oil in a small pan.
2. Temper it with 2 tsp. mustard seeds, a pinch of asafetida, a few minced curry leaves.
3. Stir in 1 cup shredded carrots and salt to taste, cook them for a minute.
4. Cool the carrot mixture, then stir it into 1.5 cups Greek yogurt.
5. Add a handful of minced cilantro.
6. Chill and serve.

* * *
Summer 2015 will be memorable for another reason- it is my summer of running. In a moment of misguided enthusiasm, I signed up for a 5K race and have been training for it since July as part of a running group. We're a motley bunch of about 15 people and most of us are very new to running. We meet one morning and one evening every week. Our running coach is unrelentingly cheerful and supportive; she smiles sweetly while kicking our collective behinds.

So far, it is been exciting, hard, painful, amazing- all of the above. And kind of hilarious. The very first time we met, the coach walked us down to the Olympic-size athletic track and announced that she's going to measure the baseline mile time for each of us. And I asked her- this shows you how stupidly unprepared I was for all this- how much of the track is a mile? Turns out it is FOUR TIMES around the track and I was like, NOOOOO in total disbelief. Is it too late to switch to the 100 meter training? That evening, I did run (or rather, run-walked) the mile, with a baseline time of 12:52 minutes. I thought I was going to die. My legs felt like lead the next day.

Over time, we've built up a routine. The coach is a stickler about warming up, then running with good form, then cooling down and stretching. Each session focuses on something different- running up and down hills, keeping a steady pace, trail running, doing drills, trying to go slightly longer distances each time.

Running sounds simple enough (you just put one leg in front of the other), but it is the hardest thing I have ever done. It takes cardiovascular fitness and stamina that I just don't have. Learning to run in 95-100 degree F heat and high humidity of Georgia has been interesting to say the least. As one of my teammates said, some days it feels like we're running on the surface of the sun.

Running with a group is what keeps us going. There is a sense of commitment and positive peer pressure. No matter the reason for not wanting to run- it is raining, you slept badly- you just show up and you run. Our progress is modest- we've gone from barely being able to run a mile to running 3 miles. Still, it feels scary and rewarding to step out of one's comfort zone and do something that you did not think you could do.

I've been working as steadily as I can, trying to keep up with my training through all the visitors and trips. I did short runs around the lake promenade next to my sister's home in Minneapolis, on a leafy urban trail in Virginia and in a nice hilly neighborhood in the suburbs of Philadelphia. A Kenyan colleague stayed with us for 10 days in July and I dragged him out to run with me- "You're Kenyan, so you can run, right?" Yes, he could run. He protested about not being in shape, then casually ran 2 miles in 16 minutes.

The 5K is just a few days away. My goal is to run the whole race (not walk any portion of it, I mean) and to finish the race in 36 minutes or under. But it doesn't really matter what happens- just showing up, training and running with determination is enough.

How was your summer? Tell me everything! I've missed being here.
Posted by Nupur at 5:45 AM