Soup may seem more of a Fall and Winter thing but we've been enjoying these two soups in this warm weather- one served hot and the other served cold. Both are very plain looking, but I promise that they taste better than they look. They are light and refreshing and I will be making them again and again. 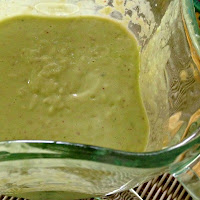 Avocado Soup takes about 5 minutes to make, and no cooking needed. 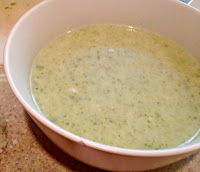 Leek and Zucchini Soup was a way to use up my CSA bounty. My German friend uses cream cheese to add body, richness and tang to soups and that's what I did here.

1. Heat 1 tbsp butter. Saute 3 leeks, prepped and chopped, and 3 zucchini, chopped, for a few minutes. Optionally, 1 chopped potato can also be added (and then omit flour from step 2).
2. Add salt and pepper, 3 tbsp. nutritional yeast and 1 tbsp. flour. Stir well for a couple of minutes.
3. Add 3-4 cups water and bring to a boil. Simmer until the vegetables are very tender.
4. Stir in 1 bunch chopped spinach and let it cook for a couple of minutes.
5. Add 3 tbsp. cream cheese, cut in cubes.
6. Use an immersion blender to blend everything into a smooth soup.
7. Add 1/2 cup milk or cream. Taste for salt and pepper, then serve hot.


*** *** ***
I was telling a friend about my exercise routine at the gym. He said to me- that sounds great, but you really should be running. I gave him a strange look- um, do I look like a runner from any angle? He proceeded to give me a lecture about all the benefits of running and how life-changing it is. Running is hard on the knees, I said, to which he quoted research that says it actually strengthens the joints (he's a physiotherapist and keeps up with the research on such things.) For every reason I gave him why running would be a terrible idea for me, he had several reasons why it would be a great idea. Later he started passing along copies of Runner's World magazine for me to read.

V overheard our conversation and decided to start running in the early mornings with Duncan. The thing about running with a dog is, after you do it once or twice, the dog expects to do it every day and you're obliged to take him for a run just to get him to stop whining. So man and dog have been jogging for a couple of months now.

It is my good fortune to have friends who care enough to badger me if necessary to try something that they truly believe will be good for me. After ignoring my friend's many lectures on the joys of running, I finally caved in and did something crazy. The local running store has a program where they train newbies for 10 weeks and then get them to run a 5K. I signed up and got fitted for running shoes. I was honest with the instructor about exactly where I stand. It might be just a 5K but for me it is the equivalent of running a marathon. I mean, the last time I ran, I was trying to catch a bus. And that was during the Bush administration!

The plan is to start my running program in July, train steadily over 2 months and run the 5K in September. I guess  This is going to be quite the adventure- learning to run in Georgia in summer. It is one hundred degrees out there, and summer only officially starts 5 days from today. If I don't collapse in the middle of the street somewhere, that will surely count as a success! But 2015 is my year of trying different ways of staying active and I am excited to give running a shot to see if it is something I will like.

In any case, it is good to have a few different exercise options to choose from. Swimming, which I love so much, has been on hold for a few weeks because I have a stubborn toe injury-  some sort of soft tissue infection which is requiring multiple rounds of antibiotics. I have to avoid swimming until that clears. Run when you can't swim, swim when you can't run- that would be a good thing.

Meanwhile, V is once again nominated for the Husband of the Year award. He gave me the sweetest birthday gift- a fitbit, one of those wristbands which tracks your activity and sleep. "As a data geek, you'll love this gadget"- he promised me, because in general I don't gravitate towards techy gadgets. I was very touched by his gesture of loving support and recognition of my efforts to get more exercise.

I do really enjoy wearing my fitbit. 10,000 steps per day is the arbitrary but commonly used target number for staying active. (This comes to about 5 miles a day for the average person, but only about 4 miles for me because I'm very short and have a small stride.) Turns out I walk 10,000 steps most days without too much effort. I've always felt like I run around all day long, and now I have hard proof of that. On days when I do a lot of cooking, I swear I get over 5000 steps just tracing the little triangle between my sink, stove and fridge. The tracker has been a good motivator to keep walking even in this heat, to and from work a few times a week, and in the evenings a couple of times of week in the company of my neighbor.


So...to make a very long story short, that's my unlikely summer project, to train for a 5K- wish me luck! All advice for a running newbie will be gratefully accepted :)
Posted by Nupur at 6:19 PM