A close friend (the one who taught me to make potstickers) came to me with a culinary challenge. Her six year daughter is not a particularly adventurous eater, but she loves loves loves one thing: a packaged curry called Madras lentils made by a company called Tasty Bite, sold in shelf-stable pouches. You snip open the pouch, heat the curry and it is ready to eat. My friend wondered if there was a way to make this stuff at home- to avoid the packaging, and there's no doubt that making it at home would be cheaper, and with more control on how much salt, oil and spice goes into the dish. Challenge accepted. I told her we could it quite easily with some reverse engineering.

Looking at the ingredient list, I'd guess that they cook onions and tomatoes together in some oil, season with cumin, salt and chilies, then add the paste to cooked lentils (whole masoor) and red beans (rajma or kidney beans) and add some butter and cream to finish. By the way, I'm not sure at all why these are called Madras lentils. Just sounded like a catchy name, maybe?

We got together this Saturday evening and cooked it together. Since I had dried kidney beans and a pressure cooker on hand, I just soaked a cup of rajma/kidney beans overnight and cooked them with the lentils. But I'm trying to make this recipe amenable to those who are total newbies to Indian cooking, so the recipe below calls for no special equipment and for no ingredients that you couldn't find in any old supermarket. 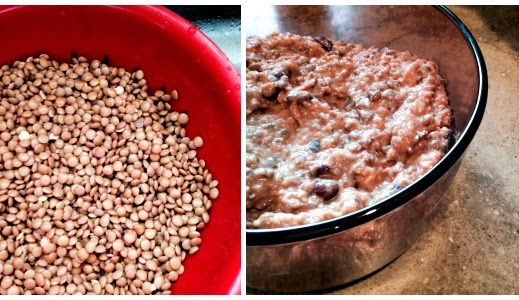 1. Soak 1 cup dry brown lentils (sold in supermarkets as lentils and Indian stores as whole masoor) for a couple of hours (see pic above). Rinse and cook in a pot with 2 cups water until tender. Set aside.

8. Combine cooked lentils, beans and onion-tomato paste in a saucepan, adding some water if needed. Bring to a boil and simmer for 5 minutes.

According to my friend, our curry looked just like the real thing, except that the packaged version looks much redder. Maybe they add Kashmiri chili powder- which is mild and bright red? She was delighted that the dish was so simple to make. According to my friend's daughter, our curry was "even better than the real thing, because it is not as spicy". She approved of the knock-off version and ate two helpings. Mission accomplished!

Now, to my own taste, I would have loved some ginger and garlic in this dish, and perhaps some turmeric and definitely more chili powder. But it is a great starter recipe for anyone new to tasting or cooking Indian food and most importantly, it made a kid and her mom happy, which is all I set out to do.