Thanksgiving is a food lover's holiday and around here it has certainly been a week of good eats. The festivities started with a potluck lunch at work on Tuesday. I contributed a main dish- harvest pilaf and a dessert- pumpkin flan. 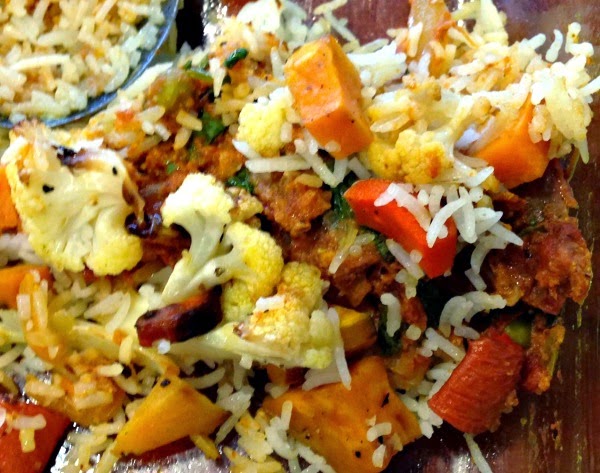 Harvest pilaf was nothing but my standard biryani recipe. I reduced the amount of rice, and instead loaded up the dish with all the vegetables that to me are the real stars of Thanksgiving. So in went a tray of roasted sweet potatoes and carrots, and another tray of roasted cauliflower, beans and zucchini.

I've made pumpkin flan a few years ago and we had enjoyed it- pumpkin flan has all the flavor of pumpkin pie but in a cool and light custard. This time, I used this recipe from Lucinda Scala Quinn. It uses pantry ingredients (and at this time of year, I count canned pumpkin as a pantry ingredient) and makes a nice 9 inch flan. The minor changes I made to the recipe: (1) I used only 1/2 cup of sugar in the flan mixture instead of 3/4 cup, (2) I used regular granulated sugar and used a dollop of molasses to make it "brown" and (3) I made the caramel in a small saucepan instead of in the oven. For the bain marie (water bath that keeps the flan smooth and tender), I used a huge foil roasting pan from the supermarket. You only have to buy it once and then you can keep using it any time you need a bain marie. 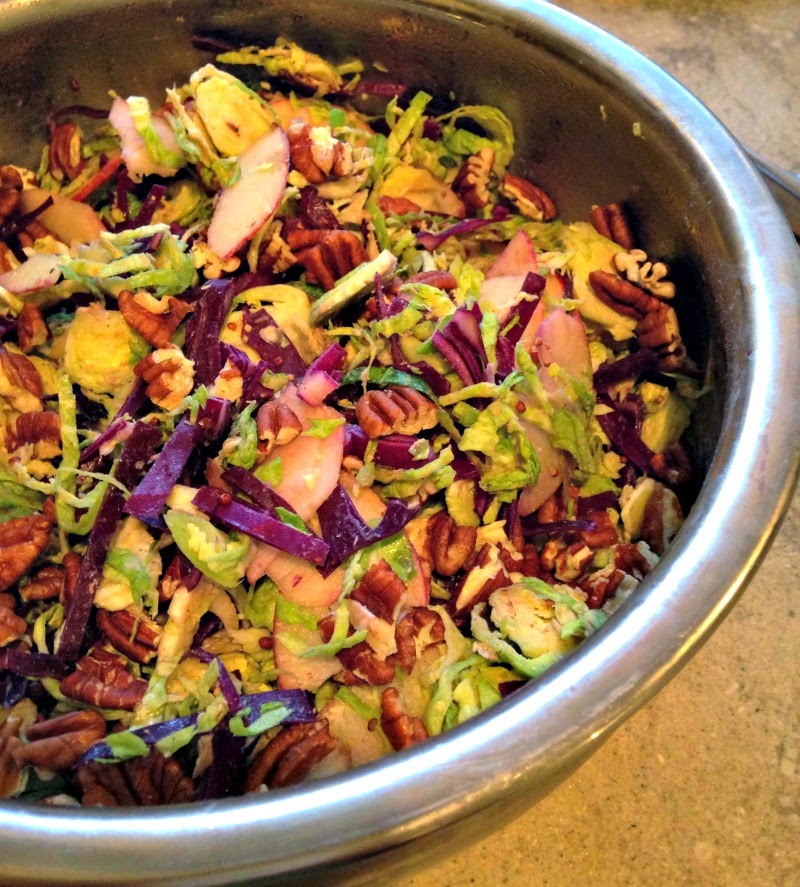 The salad was my favorite dish, a crunchy and fresh counterpoint to all the other heavy dishes. I loved it so much that I made something like it to take to our Thanksgiving dinner- which was another potluck at a friend's home. My starting point for the salad was this recipe from The Kitchn.

Here's how I made my version of Shredded Brussels Sprouts Salad.


For a main dish to take along to the potluck, I started out with the idea of making a butternut squash lasagna. Then I remembered that I had a box of jumbo pasta shells in the pantry and this seemed as good a time as any to finally cook those. Here's what I came up with, a mash up of various online recipes- and it was a resounding success. 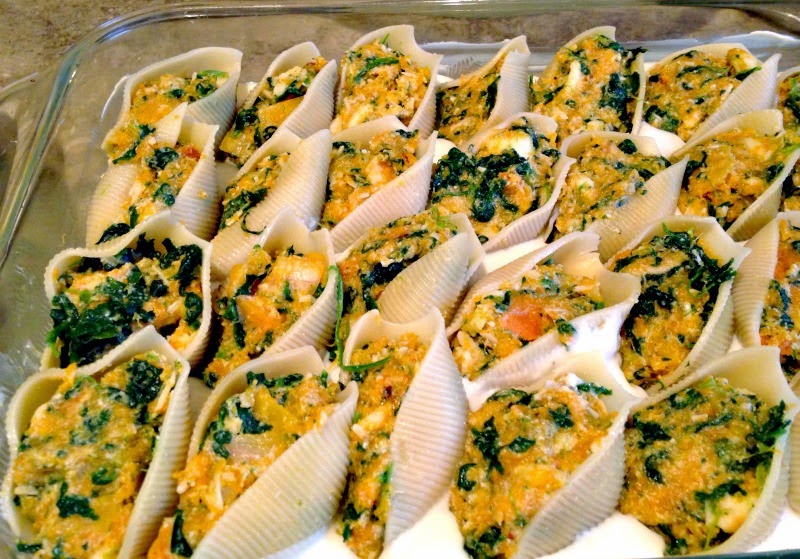 Make the filling (I did this a few hours ahead of time): 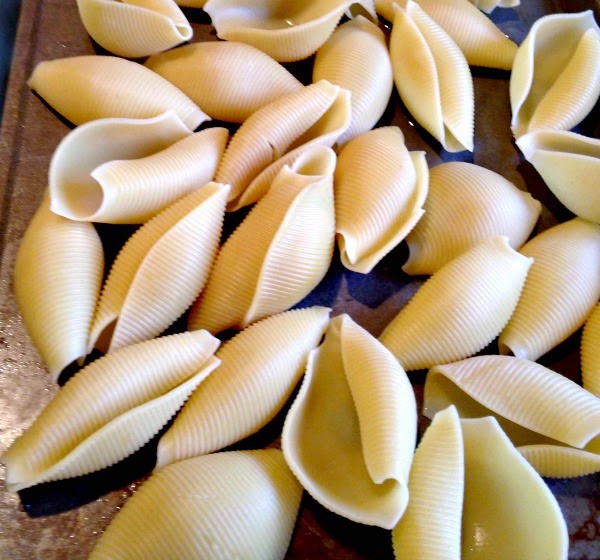 Cook the jumbo pasta shells according to the directions on the box. Here's what the cooked shells looked like- adorable and surprisingly sturdy. Lila was delighted and munched on a couple.


Make the sauce
I made 2 cups of basic white sauce for this dish. You could use a tomato sauce or no sauce at all.

Assemble and bake
Scoop about 2 tbsp. filling into each shell. In a 9 x 13 baking dish, pour the white sauce. Arrange the shells on top. Scatter with 1/2 cup grated Parmesan cheese. Cover with foil and bake at 350F for 30 minutes, then uncover and place under broiler for a minute or two to get the cheese browned. Ta da. 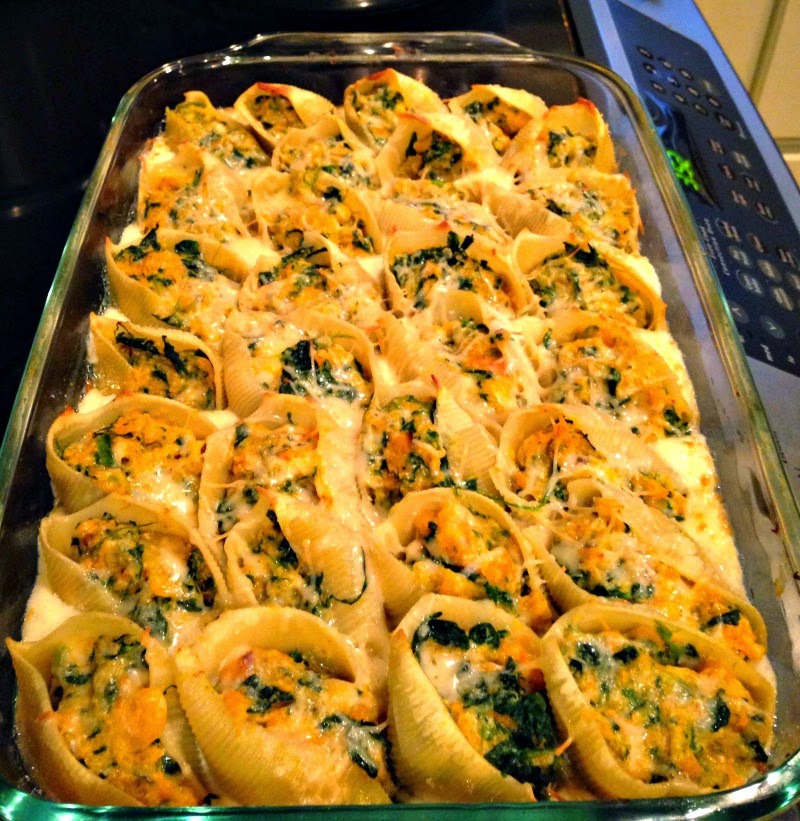 This pasta dish was full of flavor and had a pretty nice presentation (which is rare for me). Each person could conveniently serve themselves a shell or two.

I had enough cooked shells left over to make another (smaller) tray of shells the next day.