Tried and Tested Dosas, With a New Onion Chutney

Dosas- those crisp and airy crepes of rice and lentils, a staple of Southern Indian breakfasts. I've often said that I could eat dosas at every meal, and yesterday this wish came true, with dosas for Sunday brunch and then again for dinner because I ran out of time to make something else and then again for breakfast this morning because, well, because I just love them that much.

We had friends yesterday for brunch, and we do this so often that I'm getting lots of practice with putting brunches together and anticipating what dishes will be well-received. Dosas, without a doubt, have been a hit every time I've served them. Sambar for some reason isn't as popular so I serve the dosas with potato masala and cilantro coconut chutney, both of which are always popular as well.And we always make ginger chai for our guests and amaze them with the fact that chai does not, indeed should not contain 15 different spices.

After making dosa batter week after week, I've landed on the formula that works for me. The two typical ingredients in a dosa batter are rice (which can be raw or parboiled) and urad dal. Different recipes call for different proportions of the rice and urad dal and add other ingredients for taste and texture- everything from chana dal to rava.

My current favorite way of making dosa is based on Vaishali's recipe. And here's my formula:
This formula is flexible. For the raw rice, I'll often use brown rice, or then a cup each of brown rice and sona masoori rice. I've also used a combination of brown rice and barley. And for the parboiled rice, I'll sometimes use rosematta rice which is pretty and pink, or then just the usual parboiled rice which is sold as idli/dosa rice.

After the soaking and grinding and fermenting, the batter is ready to use. Sometimes, I add some ragi flour before making dosas. Dosa batter freezes beautifully so it makes sense for me to make a large batch. But the formula can be easily halved for a smaller batch. What I love is that the dosa made with this batter is beautifully brown and crisp, but also has a toothsome, substantial texture- it is not too thin and papery.

And every good dosa deserves a tasty chutney to accompany it. Along with the regular coconut chutney, I tried a new recipe last night for onion chutney from Cooking at Home with Pedatha by Jigyasa Giri and Pratibha Jain. The authors call it a must-try recipe and it looked tempting enough so I did not need much convincing. It goes well with idli, dosa or steamed rice. 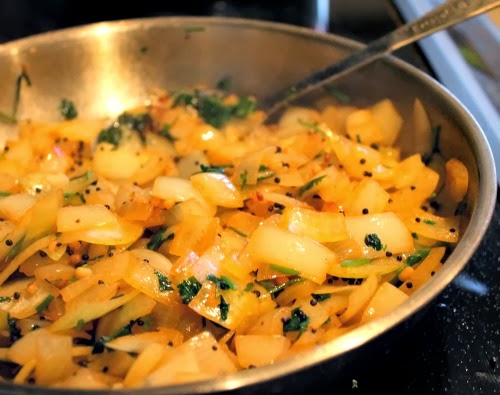 3. Add 3 coarsely chopped onions and fry them for several minutes until soft and translucent.

4. Blend the mixture (don't add any water) with 2 tbsp. tamarind paste and salt to taste to a thick chutney. 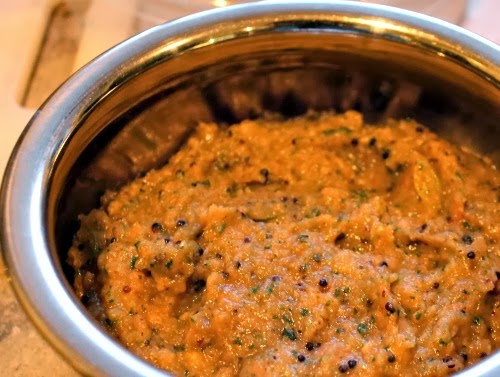 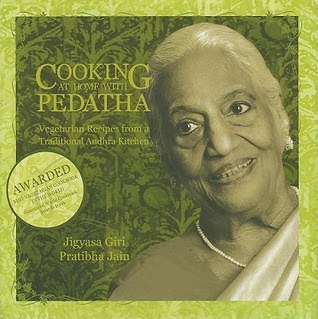 I enjoyed leafing through and cooking from Cooking at Home with Pedatha. The cookbook is a collection of a lifetime of recipes from Subhadra Krishna Rau Parigi, fondly known as Pedatha. Imagine a traditional festive spread at an affluent home- dozens of dishes arrayed around a thali- and the cookbook will teach you how to make just that. Vegetable dishes, flavorful chutneys and pachadis, sweets, all at their home-style best with recipes from a lady who clearly loved to cook. The pictures are luscious and the design is elegant. Many of the recipes call for vegetables that are common in India but not in the US but there are notes indicating substitutes. This is helpful for someone like me who has little or no access to things like such as raw banana, melon cucumbers and drumsticks.

I wish the book had a recipe index, so I could quickly look up recipes that use a particular ingredient. And I wish the book did not refer to lentils by their English names- I still get confused with split red gram and green gram. Calling them toor dal and moong dal is easier for me. But there is a pictorial ingredient list in the back of the book where I can look up for the hundredth time what split black gram means.


Apart from the onion chutney, I tried two other recipes from the book. 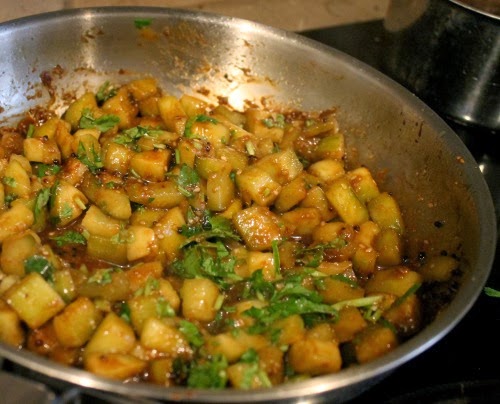 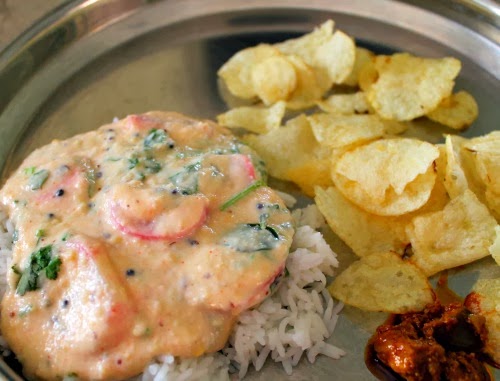 I also made majjiga pulusu (a gravy with yogurt)- a version of what I know as kadhi. Interestingly, instead of the besan (chickpea flour) that is added to yogurt to make kadhi- it adds thickness and also keeps the yogurt from curdling- this recipe uses a paste of soaked chana dal.

Everyone who enjoys simple home-style Indian cooking will find some recipe gems in this cookbook and I'm glad I finally got to cook from it.

What have you been cooking and eating this weekend? Any dosa binges you'd like to talk about? No, just me?
Posted by Nupur at 7:42 PM