I'm a lover of hearty and spicy food and therefore a frequent patron of local Mexican restaurants for casual dining out. I'll usually opt for the red enchilada platter- which arrives as two or three corn enchiladas stuffed with some cheese and smothered in a flavorful red sauce, and with lettuce, beans and rice on the side.

The sauce is fiery red yet it tastes nothing like tomato sauce. It always hits the spot and of course it was only a matter of time before I started looking up a recipe so I could replicate it at home. A bit of research revealed the secret to authentic red enchilada sauce- dried Mexican chili peppers. They give it that wonderful smoky flavor and also the beautiful brick red color. The recipes that I used as starting points are here, here and here. Some recipes include a bit of tomato, most don't. I chose to use a little bit because it adds a bit of tang and sweetness and rounds out the flavor. After several trials, here's my version of red enchilada sauce and it is truly the best thing I made in 2013.

Let's talk about the dried peppers that feature most prominently in this recipe. The first is the guajillo chile (guajillo is approximately pronounced "gwa-hi-yo"). It is a large and flat pepper with a shiny, deep red smooth skin. The flavor is mild and fruity.

The second is the ancho chile. Have you ever seen or used the fresh green poblano peppers from the produce section? The ancho chili is simply the dried version of poblano peppers. They are large and have a deep red-black color and wrinkled skin. The heat level is mild to medium with a sweet-smoky taste.

If you live in the US, your best source for these dried peppers would be the local Hispanic grocery store (or a store that sells international foods). I went in search of one in our little town. Our local Hispanic grocery looked like a forbidding place from the outside, with barred windows. I hesitated at the door a little, but when I stepped inside, I was immediately delighted with aisles and aisles of Hispanic groceries and happily purchased large bags of guajillo and ancho peppers for around $5 each. The quality of the peppers was excellent- dried but still soft; not desiccated. And I also bought large bags of dried pinto and black beans, and fresh tomatillos and cilantro at very reasonable prices.

As an aside- "Ethnic" grocery stores are such wonderful places for the home cook. They are usually worth seeking out even if they tend to be cramped and located in not-so-posh neighborhoods. I'm always urging my non-Indian friends to go to the local Indian store to look for spices (and other ingredients like lentils, rice and flours) that are fresher and cost a fraction of what they do in the gourmet markets. Similarly, I've enjoyed exploring Mid-Eastern, Italian, Asian markets etc. for well-priced and authentic (and often mysterious when I can't read the labels) ingredients from those regions.

Before I get to the recipe, a quick reminder- When working with dried peppers, remember to wash pepper residue off your hands and avoid touching your face or eyes. Wear gloves if you like. Dried peppers can vary in their level of heat, and what's mild to me may be too spicy for you, so make and taste the sauce once and then vary the number of peppers as you wish.


Red Enchilada Sauce
A One Hot Stove creation; inspired by several recipes that I found online
(Makes 2-3 cups; enough for a 9 x 13 tray of enchiladas) 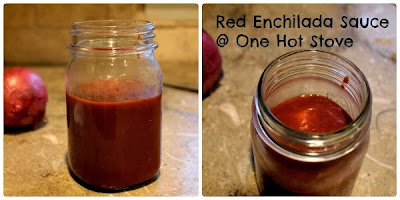 1. Let's start with the dried peppers. Tear off the stem from all the dried peppers and shake out and discard most of the seeds. With a knife (or more easily with a pair of kitchen scissors), cut each pepper into 3 or 4 pieces.
2. In a small pan, heat 1 tsp. oil and toast the pepper pieces for a few seconds to toast them. Set them aside.

3. For the sauce, heat 2 tbsp. oil in a saucepan.
4. Whisk in the flour and saute until toasty.
5. Add the garlic and toasted peppers and saute for a few seconds.
6. Add the tomatoes, salt to taste and 2.5 cups water.
7. Bring to a boil, cover and simmer for 5 minutes.
8. Blend the mixture to a fine sauce using a regular or immersion blender. If the sauce feels too thick, adjust the consistency with water.
9. Taste the sauce and add a pinch of sugar if needed to round out the flavor.

I've bought canned enchilada sauce once or twice before, and this homemade version is thicker and more flavorful than any I've tried. The enchilada sauce can be made ahead of time and stored in the fridge for up to three days. Other people report success with freezing it but I have not tried that for myself.

Developing this recipe led me to discover some new ingredients and a new store in my town and the enchilada sauce has led to many successful meals. Color me happy! Over the next few days, I'll post the different ways in which I use this sauce.

The only downside to all this is that next time I'm at a Mexican restaurant, I'll probably annoy my dining companions by saying, "Well, I could make a better version of this at home"!

Coming up tomorrow: Let's make enchiladas.
Posted by Nupur at 7:57 AM