This is a new tradition on One Hot Stove- at the end of the month, I do a round up of the highlights of that month, and invite you to do the same in the comments. Here are the lists for September and October.

A Thanksgiving meal, of course. We were invited to a small Thanksgiving dinner at the home of a senior colleague and her husband. They made a traditional meal but went out of their way to get a Trader Joe's vegan turkey-less stuffed roast for the vegetarians, so it was my very first Thanksgiving with a turkey stand-in! It was delicious, accompanied by the many sides like cranberry relish, mashed sweet potatoes, green beans and mushrooms and buttery rolls with honey. It was so nice to spend Thanksgiving day catching up on chores around the house/yard and then to just show up for a nice feast.

My contribution to the meal was a chocolate pecan pie. This time I used a frozen pie crust from Trader Joe's and I wasn't happy with this pie crust at all. I should have made my own like I usually do or perhaps bought another brand.

Cooking and Baking a few DIY experiments this month.

Salted caramel sauce: Our neighbors invited us for dinner, and I made dessert to take along, continuing the apple baking fest with a naked apple-vanilla pie. At the last minute, I decided to make a salted caramel sauce to drizzle on the pie. I used this recipe, and my only change was to double the amount of heavy cream to a cup. It was amazingly easy to make. I've made caramel many times before and I find it easy to rely on the color of the caramel rather than using a candy thermometer. The resulting sauce is rich and decadent with a distinctly grown-up and gourmet taste thanks to the salt. This sauce takes mere minutes to make, and a few inexpensive ingredients, and would be a lovely holiday gift (it can be enjoyed on ice cream, pancakes, fruit)- just remind the lucky recipient to store it in the fridge.


Chocolate syrup: We were visiting someone's home, and Lila wanted a cup of warm milk. On a whim, I stirred in a bit of chocolate syrup that I found in their fridge- you know, the ubiquitous brown plastic bottle of Hershey's chocolate syrup. Well, that was enough for the kiddo to fall in love with "chocolate duddu". A bit of searching revealed that chocolate syrup is nothing but cocoa powder, sugar and water.

I made Lila her very own chocolate syrup: Mix 1/3 cup cocoa powder, 1/3 cup sugar and 1/2 cup water in a small saucepan (these proportions are flexible). Bring to a boil, whisking often to dissolve the cocoa powder. Simmer for 2 minutes. Turn off the heat and add 1 tsp. vanilla extract. Let the syrup cool and store it in the fridge for a couple of weeks. This is a simple chocolate syrup that is great for stirring up a cup of chocolate milk, also nice for drizzling on waffles and pancakes.


Pumpkins: We went pumpkin picking with Lila and got home a couple of small pie pumpkins. October turned to November and I knew I had to use up the pumpkins fast and not relegate them to the compost heap. Cutting up pumpkins and other winter squashes seems like such a bother, I always feel like I'm risking my fingers as I hack away at them. This fabulous tip was just what I needed: baking  the whole pumpkins at 300F for about 30 minutes got the skin a bit soft and easier to cut and the whole process was almost fun. The only disappointment was that the pumpkin tasted so very bland.

Reading
Brain on Fire: A Month of Madness by Susannah Cahalan, a memoir of a young woman who is gripped by a sudden and severe psychosis which turns out to be a rare autoimmune disease. It is an engrossing read (although I felt it could have been better as a long magazine article and not necessarily a whole book) and made me reflect on the stigma of mental illness and how little we understand its physiological causes.

I'm also continuing to follow the adventures of Bertie, the child prodigy and Cyril, the dog with a gold tooth and Domenica, the freelance anthropologist in The Unbearable Lightness of Scones and The Importance of Being Seven, both of the 44 Scotland Street series.

I read many glowing reviews of a cozy mystery called Three Bags Full by Leonie Swann, a novel in which a herd of sheep solve the murder of their shepherd, but unlike all the people who loved this book, I did not enjoy it much and gave up a third of the way into the story.

But the best thing I read all month wasn't in a book but on a blog: Kamini's funny, warm, delightful essays on everyday life in Madras- The Twelve Days of Convalescence and Shopping for Liquid Gold.

I watched the first two seasons of Downton Abbey earlier this year- and the combination of family drama and glamor and social commentary sucked me right in, of course. This month I stumbled on a blog where, to my amazement, I found complete episodes of Seasons 3 and 4 of Downton Abbey- after spending many happy evenings experiencing emotional upheavals with the Crawleys while knitting holiday presents, I'm all caught up.

To drown my disappointment at having no more episodes to watch, I've now turned to another historical British mystery drama, The Bletchley Circle which I found on Netflix.

The best thing I watched this month was not on a screen, though. We got a babysitter (after what seems like months) and went to see a live performance of improv comedy: The Two Man Group of Colin Mochrie and Brad Sherwood- the guys are regulars on the TV improv show Whose Line is It Anyway which I used to love. They are ridiculously clever and funny. 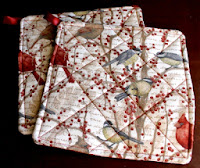 Our Thanksgiving hosts are avid and knowledgeable birdwatchers. I found fabric with winter birds and made them a pair of potholders as a small hostess gift. Potholders are touted as a beginner-friendly sewing project but I personally find it a bit of a pain to sew those thick multiple layers together. 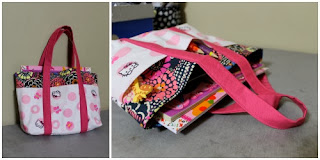 At my daughter's preschool, they put up wish lists from local families who find themselves unable to afford Christmas gifts for their children. One six year old girl wished for art supplies- the note said she likes Hello Kitty. Well, I found some Hello Kitty fabric and made her an art tote bag (using this very easy pattern) that I filled with coloring books and drawing pads. It has 6 pockets stuffed with little treasures like erasers, stickers, markers and stamps. I hope she likes it. 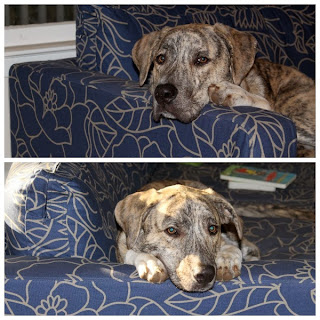 According to the adoption papers, today is Duncan's first birthday. This enormous puppy with the big and gentle heart is the best thing that happened to us this year. Every single person who meets him falls in love with him. This weekend alone, he "converted" a little girl who was visiting us- she is terrified of dogs, but after an evening with Duncan, she was cuddling with him on the sofa and giving him kisses.

Duncan makes our hearts melt every day. Even if he does get in trouble quite often with his puppyish goofiness. His biggest misadventure this month: he was snooping under my sewing table, got his foot entangled in the sewing machine power cord, and when he walked away, he pulled the sewing machine which came crashing on the floor with the most appalling crash. Duncan was terrified and fled. I was furious and yelled at the top of my lungs. By some miracle, the sewing machine has a large crack but it still works fine! Toddlers and puppies- no matter what exasperating thing they do, you can't stay angry with them for long. I mean, just look at that face.

...a month of fun and festivities- my calendar is happily packed with events like The Nutcracker ballet and a cookie exchange and a potluck breakfast. I'm also looking forward to participating in Giveaway Day next Monday- so come back next week for a chance to win something I've made.

Happy December, friends! Let's make the best of what's left of 2013. But before then, I've love to hear about how November treated you: What have you been cooking, eating, reading, watching, making and planning? What are you looking forward to in December?
Posted by Nupur at 9:07 AM