No-Knead Naan and the Need to Read

I'm been doing my part to popularize Indian food lately. We made new friends in the dog park and invited them over for an Indian brunch of dosa and egg burji and such. They enjoyed the food and asked if I would teach them to cook a few Indian dishes. Nothing would make me happier, of course, and our first lesson consisted of rajma, pulao with lots of vegetables and some hard-boiled eggs, and koshimbir. They practiced that meal a few times (texting me pictures- they got an A+ each time) and then they wanted another lesson.

So we got together yesterday and made a big pot of matar paneer. Normally, I'd have put up some jeera rice to serve the curry with, but then I thought I'd try out a recipe for naan from a new bread book I'd been sent to review. I'm notoriously bad at making flatbreads and I've already shocked many readers by revealing in this post that I buy tortillas rather than rolling my own rotis. So this whole naan exercise was an experiment to say the least.

The book in which I found the naan recipe is the latest one by Jeff Hertzberg and Zoë François- they specialize in artisan bread in five minutes a day. The general idea is this: you mix the usual suspects- flour, water, yeast and salt without any kneading (just a quick mixing) and let the dough ferment for only a couple of hours or so on the counter top. Then cover the dough and stick it in the fridge. Later that day or over the next several days, you lop off a chunk of dough, let it rise again for a while and bake a fresh loaf. The process can be seen in this video.

This method making bread making accessible because there's very little effort involved in making the dough and when you have the dough ready, fresh bread can be made even on a weeknight, say. Hertzberg and François have adapted this general method to all sorts of doughs that in turn make a mind-boggling variety of breads. For instance, there is an olive oil dough that is perfect for pizza and focaccia, a rich eggy brioche dough for breakfast pastries and a 100% whole wheat dough for sandwich bread. I think I'm going to be baking my way through most of this book over the next few months! 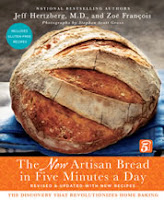 The New Artisan Bread in Five Minutes a Day book starts with a detailed description of the method and all sorts of tips for trouble-shooting. There is the basic master recipe which can be shaped into all kinds of artisan breads like baguette and ciabatta. Then there are chapters on flatbreads and pizza and enriched breads and pastries and a whole section devoted to gluten-free breads.

Let's circle back to the naan, which in my understanding is a flat bread that is usually made with white flour, leavened with yeast and cooked in a blazing tandoor oven, giving it puffy blistery spots and a smoky taste. In this recipe, I used the light wheat dough from The New Artisan Bread, which has a bit of whole wheat but still mostly white flour, and the naan is cooked on a hot cast iron tava, which is a very convenient way for a home cook to make it. I'm noting down the recipe as I made it, but the book has lots of details that I can't possibly cover in this post.


No-Knead Naan
(Adapted from THE NEW ARTISAN BREAD IN FIVE MINUTES A DAY: The Discovery That Revolutionizes Home Baking by Jeff Hertzberg and Zoë François, makes about 8 naan, serves 4-6)

1. Make the dough by mixing the following in a large bowl until the flour is incorporated:
2. The dough will be very wet and sticky- that is OK. Cover the bowl with a clean dish towel and let it sit at room temperature for 2 hours or until it rises and collapses.

3. Cover the bowl with a lid (not an airtight one) and store in the fridge. From this point, you can use the dough any time within a week. I left it in the fridge for only 6 hours or so.

4. Later when you want to make the naan, heat a cast iron griddle. Divide the dough into 8 portions, roll each one with floured hands into a round, and pan-fry with ghee. My addition was to press poppy seeds into the rolled-out naan- it makes them even tastier...and reminds me of naans served in restaurants.

The recipe suggests covering the pan to cook the inside of the naan, but I left it uncovered.

I clearly still need practice to roll out dough but the naan-making was a success. The fresh puffy naan was simply a delight to dunk into curry and savor while still hot. If you're scared of working with yeast, would be a simple recipe to dip your toes into the world of bread-making.

Disclaimer: I was sent a review copy of  THE NEW ARTISAN BREAD IN FIVE MINUTES A DAY: The Discovery That Revolutionizes Home Baking at no charge. All opinions expressed in this post are my own.


* * *
This next part of the post may result in lots of additions to your (probably already teetering) to-be-read pile, I'm just warning you.

Two book blogs- Regular Rumination and Sophisticated Dorkiness are hosting Nonfiction November, a month devoted to non-fiction books. I've been observing from the sidelines as several bloggers shared their favorite non-fiction reads in Week 1. Week 2 was "Be the Expert" as bloggers shared lists of books related to particular topics that interest them. 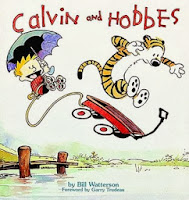 If you like Calvin and Hobbes by Bill Watterson, or any other
comics/graphic novels at all, you should read Understanding Comics by Scott McCloud. It is an absolutely brilliant look at the history of comics and the art of cartooning. I don't even like comics that much but McCloud's book is just so fascinating that I will be reading many more.

Also this week, I've been reading a book about books; a non-fiction book about fiction. It is called The Novel Cure: From Abandonment to Zestlessness: 751 Books to Cure What Ails You by Ella Berthoud and Susan Elderkin. The writers are bibliotherapists- meaning that they prescribe novels to help a reader deal with the particular situation that they're facing. I can't for the life of me tell if this is an actual profession but it well could be- maybe there is a licensing exam and everything.

The premise of the book is that while there are self-help manuals for all of life's problems, sometimes the pages of a novel can offer help in the form of a literary character facing a similar situation, or by simply transporting you to a different setting for a welcome respite. As gimmicky as the book is, I spent several hours flipping through it in delight.

Among their prescriptions, I found some books that I've read and liked and I agreed with their application, so to speak. In parentheses are quotes from the book.

Ailment- Resistance to change
Cure- Empire Falls by Richard Russo: "If..."surviving not thriving" is pretty much your MO, let Empire Falls suffuse you with a rueful understanding of the perils of inertia".

Ailment: Under pressure to have children
Cure- We Need to Talk About Kevin by Lionel Shriver: "If you are sick of justifying your childlessness...send them this novel for Christmas. They won't ask you about it again".

Ailment- Being different
Cure- Middlesex by Jeffrey Eugenides: "Eugenides's generous expression of Cal's character shows how full and uncontainable the human personality is, how much it exceeds commonly assumed boundaries".

Ailment- Inability to express emotions
Cure- Like Water for Chocolate by Laura Esquivel: "If you, too, find it difficult to say, "I love you", try saying it with food".

Ailment- Hypochondria
Cure- The Secret Garden by Frances Hodgson Burnett: "Let this novel lure you from your bed to find your own secret garden".

There are 751 novels listed in this book, the vast majority of which I have not read, but the weird thing is that most of the descriptions sounded depressing, or just not very inviting for some reason or other and only a few novels made it onto my TBR list.

Prescribed as a cure for despair: "...Alone in Berlin teaches us that sticking tenaciously, proudly, defiantly to our sense of what is right and true is enough- and the only fail-safe cure for despair that there is". This book is written by Hans Fallada.

Something Wicked This Way Comes by Ray Bradbury is prescribed as a cure for dread. "...you are hooked. You have to know". Although Bradbury has a reputation for intensifying dread rather than alleviating it, but now I really have to read this book.

I Capture the Castle by Dodie Smith is recommended as a cure for writer's block. I will read it and see if this cure works for me.

The book has a list of ten best novels for thirtysomethings, and I felt like I had to choose one to read: The Tenant of Wildfell Hall by Anne Bronte.

Do you read much non-fiction? Got any favorites to share?
Posted by Nupur at 7:24 PM