Apple Pie for a Crowd

(...and an apple cake that you'll want to hide and eat all by yourself.)

Clearly, I'm going to town on the crisper full of apples that we bought in North Carolina. They are exquisitely crisp and sweet, perfect for snacking on (Lila likes apple slices slathered with peanut butter) but as a baking enthusiast, I had to try them in some recipes too.

There's nothing like the smell of baking apples to remind me that Fall is here. Well, that and the metric ton of dead leaves clogging up the yard that I'm trying my best to avoid raking. 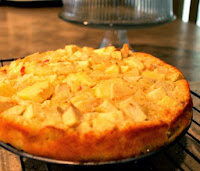 The first recipe I tried was Dorie Greenspan's French Apple Cake from David Lebovitz's blog. What's a French apple cake versus an American apple cake? Well, instead of the traditional and much beloved pairing of apples with cinnamon in American desserts, this cake is flavored with rum. Not to confuse a French recipe with an American idiom, but this recipe simply hits a home run.

The cake is made of very basic ingredients, along with a dash of rum, as I said before. I used Bacardi Gold rum which sits in my pantry all year round only to be used in fruit cake. My only modification was to use 1/2 cup sugar instead of 3/4 cup. The apples are so plentiful that the batter is merely a coating for the apple pieces. This cake was a delightful treat, with soft chunks of apples in a cake so light and tender that it almost tasted like custard. I don't have much of a sweet tooth but I honestly kept coming back and stealing chunks of it all day.

The second recipe came about when I needed to take a dessert to a gathering. I was longing to make apple pie but a pie only serves about 8. Normally. In my house, it serves 2 or 3. Anyway, I discovered that there is such a thing as a slab pie, that is, all the layers of a pie baked in a larger format like a 9 x 13 pan or a half-sheet pan.

I found a recipe that called for pie crust to be patted into the pan- seriously makes things easier. Here's my tweaked version. This apple slab pie was an absolute treat, especially served warm (leftovers can be easily warmed in the microwave oven).


Apple Pie for a Crowd
(Adapted from this recipe)

2. Add ice cold water a couple of tablespoons at a time and mix until the pie dough just comes together. Pat this dough into the bottom of a 9 x 13 pan. Put the pan into the freezer while you make the rest of the layers.

6. Assemble the slab pie: Pour apple mixture into the pan and level it off. Scatter crumb mixture evenly on top.

7. Bake for an hour or until the filling is bubbling.

These two recipes were both pinned to my Sweetest Things board and are Pins #2 and #3 for the Pin It and Do It challenge.