V and I can hardly believe this is true, but our little girl is turning TWO. Lila is growing into a little person with a very definite mind of her own. We celebrated this weekend with a simple party at home, with a few close family and friends. This year, time just got away from me, V was traveling, we were juggling too many things, and the party was put together with the minimum of time and fuss. I just wanted to get a few basic things right: (a) plenty of food, (b) a tasty cake and (c) sew some party favors.

The Menu was a light dinner and completely mismatched as you can see! I was hoping there was something for everyone. We had watermelon cubes, blueberries, red pepper hummus with pita chips, veggies with ranch dressing, Thai inspired quinoa salad, bow tie pasta tossed in a white sauce, tortilla roll-ups, matar paneer and jeera rice. No cuisine left behind, that's what I say. Next week (or sometime in the next few weeks), I'll post my recipe for the matar paneer.

I'm no fan of disposable party ware so we bought sets of reusable plates, cups, utensils earlier this year and will use them for picnics and birthday parties for years to come. I don't have a problem with washing a pile of dishes after a party at all, and it saves a ton of waste. 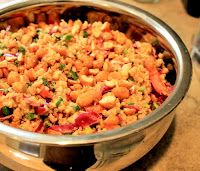 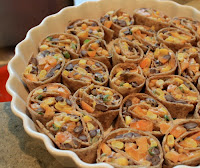 The Cake: On the hunt for a cute and easy to assemble cake, I found this cute fishie made with a 6 inch cake and a dozen cupcakes. So sweet and clever. And easy to serve.

I had invited several of Lila's daycare teachers, not know how many would actually be able to come, and wanted to have plenty of cake to go around. It seemed like the right occasion to try this recipe which makes a whopping 36 chocolate cupcakes. The recipe title says "far-from-disaster cake"- at first glance, this doesn't sound like a ringing endorsement. In reality the cake was an unqualified success- the exact opposite of a disaster.

All you need is a very large mixing bowl, the one I used should almost be called a basin rather than a bowl. I followed the recipe closely and my only modifications were:

1. Instead of buying a pint of buttermilk (and wondering what to do with leftover buttermilk), I added 1 tbsp. white vinegar to milk to make "clabbered milk" and used that in place of buttermilk.

2. I did not buy any fancy chocolate, instead using Trader Joe's semi-sweet chocolate, the kind that comes in 1 lb bars.

3. Because kids would be eating these cupcakes, I skipped the hot coffee and used hot water instead.

The batter came together quickly and I poured it into a 6 inch cake pan (not a very common pan size but I found one at Michael's), 30 cupcake liners and still had enough left over for a bit in a loaf pan. The oven was simply crammed with chocolate cake.

The frosting was a strawberries and cream frosting: I pureed about 10 ripe strawberries with a couple of tbsp. of jam in a blender and folded it into whipped heavy cream. Add some sugar if necessary and there you go. It makes for a light and very delicious frosting and the combination with chocolate cake is a match made in culinary heaven.

The frosting was slapped onto the cake and cupcakes and then I placed a blueberry as the fish eye and strawberry slices as the mouth. The poor fishie may look very imperfect (I've made my peace with my poor cake decorating skills) but this cake/frosting was a tasty mouthful. Definitely something I'd make again and again.

The Party Favors: Lila is an adventurous kid. Her mottos in life: Why walk when you can run? Why sit when you can climb? This results in a dozen bumps and small falls and boo-boos on any given day. Using this tutorial on Bubbles and Bobbins, I made Lila an owlie rice pack. Let me tell you, these rice packs are excellent TLC for those minor boo-boos when a child's feelings are hurt more than there being any physical injury. Now when Lila has a boo-boo, she'll start bawling and ask for owlie. Clutches the owlie, pats it on the hurt spot and there, she's all smiles again. With the success of owlie, I made a whole parliament of rice owls (that's really the collective noun; I didn't make it up) to give as party favors to her friends. I included the cute poem (also on the tutorial blog post) which explains that the owl can be used as a hot/cold pack. 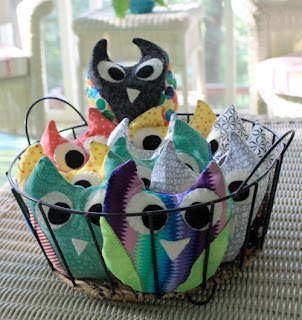 We debated about whether to put a "no gifts" request in the invitations, but decided against it because gifts are a big part of the fun of childhood birthdays. Besides, I always feel disappointed when we are invited to birthday parties and asked not to get gifts, because I love picking out or making birthday gifts. So Miss Lila was showered with useful and thoughtful gifts, including a gorgeous board book, a doctor set, a giant sticker book, a metal water bottle and a Mrs. Potato Head (remember the potato head toys? I loved mine as a kid). She was also given a beautiful handmade quilt- I'll take a pic once I hang it up.

Lila ran around with her little friends and stuffed herself with cake. This is pretty much the best kind of celebration as far as I am concerned.

Did you have a fun weekend? And I would love to hear about how you like to celebrate birthdays. Have a wonderful week and I'll see you next Monday.
Posted by Nupur at 10:04 AM