Hello from (mostly) sunny Georgia! The huge storm Sandy battered the North East US this week- we in the South East were spared and got only high winds and cold temperatures because of the storm system. My best wishes to everyone in the North East- I hope you stay safe and warm and dry.

Our family moved this month and all in all, it was a smooth ride. V and I divided up our precious creatures for the move. He drove down with Dale sprawled in the back seat and our curry leaf plant strapped in the passenger seat; a 12 hour drive over 2 days. I took a flight with Lila. I'm happy to say that dog, plant, baby all arrived happy and intact. We're settling into our new home and exploring our new town. 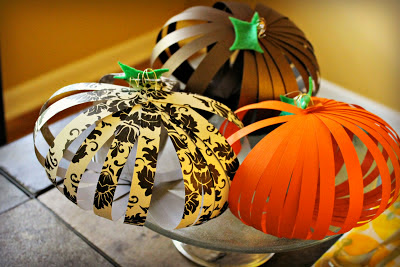 I wanted to pick up the blogging thread where I left off and the Fall Pinterest Challenge on Young House Love (YHL) gave me the perfect excuse to make something and post about it. In case you don't already read it, YHL is an endlessly fun blog written with humor and grace, full of design inspiration and craft ideas. As we transform this house into a home, this is a blog I'll turn to this blog often.

As you might expect, the Pinterest challenge is to stop pinning and start doing. I chose one craft and one recipe.

The Craft Pin: Pumpkins are the dominant decor in this season of Fall, Halloween and Thanksgiving. I had pinned an easy paper craft- making paper pumpkins from strips of patterned paper. I loved the simple, modern look of these pumpkins and thought it would be fun to make a few. The tutorial on It's Always Autumn is very well written. All I needed was some wire and patterned paper from the craft store. I did not find very cool patterned paper so I made the best of the limited selection I found- one black and white damask design, a textured orange and a metallic paper. I eyeballed the width of the strips and one fun evening of cutting and wiring later, I got this. 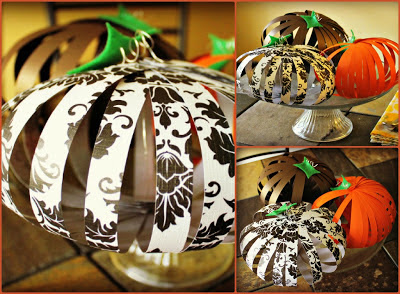 I would call this pin a moderate success- I enjoyed making these pumpkins and arranged on a cake plate, they add a pop of DIY festive fun to my otherwise-bare dining room. But it is challenging to make the pumpkins keep their shape; the strips keep sliding off to one side.

The Recipe Pin: When I moved from St. Louis, I tried to eat down the pantry as much as possible. In the last week, I still had a few things left that I did not want to move and gave them to friends to use up. The big bag of idli rava eluded all my attempts to get rid of it. I haven't been using idli rava since I switched to using idli rice for idlis. That was the only thing I ever made with idli rava so the stuff just sat there. None of my friends wanted it and I can't throw away food, so the idli rava joined the husband, dog and curry leaf plant on the long trip to its new pantry!

I resolved to use it up- can't have the idli rava still sitting there until we move to some other place. And that's how I pinned Nandita's recipe for Arisi Upma. In her post, she does a nice job of describing all the selling points of this recipe: made in minutes, no need to roast the rava and no chopping!

I had made ghee and the pot in which I make ghee always had a nice amount left on the sides once I pour the ghee into a jar. I don't wash the pot; instead I use it right away to cook something else, and that dish turns out more appetizing than ever with all the burnt on bits from ghee-making. That's the pot I made this upma in.


Arisi Upma
(adapted from this recipe on Saffron Trail)

1. Heat 1 tbsp coconut oil or ghee in a pan.
2. Make the tempering: mustard seeds, asafetida, curry leaves, urad dal, chana dal, bits of dried red chillies.
3. Add 3 cups water, handful of frozen peas, salt to taste and a tsp. of jaggery or sugar. Let the water come to a rolling boil.
4. Add 1 cup idli rava while stirring constantly.
5. Cover the pan and let the upma cook for 3-4 minutes. The water will be completely absorbed.
6. Turn off the heat. Add a handful of chopped cilantro.

Just as advertised, this was a quick and easy recipe. I have no doubt that the idli rava will be put to good use after all. But if you have any other ideas for using idli rava, I'm all ears.

I'm linking this post to the round-up on Young House Love, where you'll see hundreds of pins being tried and tested. 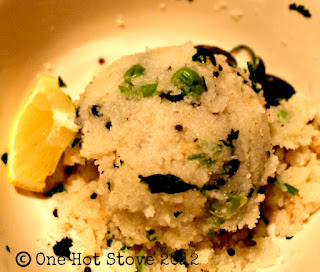 In a fit of ambition, I have decided to participate in NaBloPoMo (National Blog Posting Month), traditionally held in November of each year. The idea of NaBloPoMo is to exercise one's writing muscles by posting every single day. So November will be one long buffet of posts here on One Hot Stove. Not every post will contain a recipe. There might be crafts and photos and ideas and lists and book reviews and random musings. I'll just go with the flow and see what happens. Consider it a fair warning, dear readers (LOL). If you'd like to see a post on any particular topic, now is your chance to request it.

See you tomorrow- wheeee!
Posted by Nupur at 1:56 PM