Bisibelebhath: A Big Bowl of Comfort

This weekend I decided to tackle a classic Indian regional dish: bisibelebhath. An iconic dish from the Southern Indian state of Karnataka, bisibelebhath (BBB to those who know and love it) is a medley of lentils, rice and vegetables that is designed to nourish body and soul.

Suma of Veggie Platter recently wrote a must-read post describing many nuances of BBB and explaining that this mouthful of a word bisibelebhath literally translates into "hot rice lentil mixture".

Bisibele powder (the spice mix used to make BBB) has been a pantry staple in my kitchen for many years. MTR is a well-known and widely available brand and I have always thought their BBB powder was tasty and authentic. I use this bisibele powder to make a BBB-inspired quick pressure-cooker khichdi, my go-to dinner that is still quicker to make than picking up the phone and asking for take-out.

A few weeks ago, I was the lucky winner of a giveaway at Mysoorean and Vani sent me a bunch of wonderful goodies from the famous Subbamma Stores in Bangalore. Included was a big packet of the most aromatic bisibele powder. Now here was a chance to revisit the making of BBB. My memory is poor on the whole but highly selective- things related to food and recipes I can remember even years after reading them.  That's how I remembered that Nandita of Saffron Trail had mentioned that her favorite BBB recipe was this one from Healthy Home Cooking, a blog that seems to be dormant now.

The recipe breaks down BBB making into a few simple steps. Read the original recipe for the details (and if you want to make the spice mix from scratch); below I have my version of it. Once the spice mix is ready (or you have a store bought one on hand), making BBB is much easier than I had ever imagined.

I doubled the recipe given below to make an enormous pot of BBB. The idea was to share a large portion with some friends. They have given us mountains of their daughter's outgrown clothing and gear for baby Lila and sending them homemade Indian food once in a while is my small way of saying thank you. We ate the rest over two days of lunches and finally yesterday I had a small portion that I had squirreled away for breakfast.

By the way, I have a question for my Kannadiga friends: Do you make anything other than BBB with BBB powder? 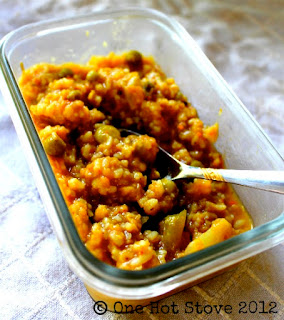 BisiBeleBhath
(Adapted from this recipe)

Step 1: Dal
Soak 1 cup of toor dal for 30-60 minutes. Rinse several times. In a large pot, combine the rinsed toor dal with 6 cups water, a drizzle of oil, pinch of turmeric, salt. Cook until the dal is barely tender.

Step 2: Rice and Veggies
To the cooking dal, add 1/2 cup sona masoori rice (rinsed and soaked if possible) and 4-6 cups diced mixed vegetables. Carrots, cauliflower, green beans, bell peppers, peas are all good. Frozen pearl onions and Lima beans (sold in all US supermarkets) are freezer staples in my home and taste great in BBB. Cook the mixture until rice and vegetables are about halfway cooked. Add water if needed to keep the mixture soupy (remember that it will thicken as it cools and you want the final result to be more like a stew than a dense paste).

Step 3: Spices and Seasoning
In a small bowl, mix 1 tbsp. bisi bele spice powder (or more or less to taste), salt and 2 tsp. tamarind paste with a bit of water to make a paste. Add this to the pot. Bring to a boil and simmer until the rice and vegetables are cooked. Turn off the heat. Taste the BBB and add more salt/tamarind/BBB powder as required.

Step 4: Tempering
Make a tempering with mustard seeds, asafetida, cashews/peanuts and curry leaves. Pour the sizzling tempering onto the BBB. Stir in plenty of ghee and minced cilantro.

Step 5: Serve
BBB should be served piping hot (it does reheat beautifully if stored in the fridge). I like it with yogurt or raita and with something crunchy on the side- like papad or potato chips.

These days, as I go about my daily routine, my thoughts keep turning to a brave little six year old boy named Fred. He is the son of our dear friends Mark and Joanne Drew who lived here in St. Louis when Fred was little. The reason I'm thinking of Fred all the time is because he entered Seattle Children's Hospital yesterday for a life saving bone marrow transplant.

Fred's mother is writing a blog which allow friends and well-wishers to go along with the family on this tough transplant journey. Joanne has a way with words- just listen to her speech at the Make a Wish Foundation gala (Fred is a space travel buff and wannabe astronaut and was granted the wish of watching the last NASA space shuttle launch).

I thought to myself- wouldn't it be fun if Fred could get cheerful mail from all over the world to open in the hospital? He's going to be there for several weeks. If you have a few minutes to spare, please consider sending a happy card or postcard to little Fred with your good wishes. If you have kids, maybe they would like to make a little card for him. Here's the address: