I spent a snowy Sunday baking up treats for the holidays. It is utter luxury to take a day off from weekend chores and social events and instead to chop chocolate, whip eggs, sprinkle spices, roll dough and fill the kitchen with the aroma of home baking. All while basking in the soft glow of a warm home while snow piles up outside the windows.
This is the resulting gift box of festive eats, and the photo is my submission to No Croutons Required: The Festive Photos Edition. On the right is rugelach, a filled pastry, in the middle are little cups of sweet-spicy roasted nuts, and on the left are Dorie Greenspan's famous world peace cookies. 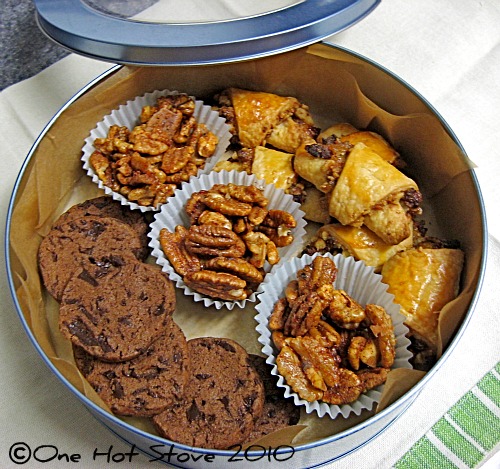 I've written a post about the world peace cookies before, here. My baking skills have improved a tad in the 3 years since I wrote that post, because I was a little better this time around at chopping chocolate, getting the dough together and baking nicer looking cookies. This is one delicious cookie, with a touch of salt highlighting the chocolate flavor.  They are eggless, short-bread like and simply melt in the mouth.
If you want to make cookie dough in advance and keep it on hand for last-minute baking, this recipe is perfect. I kept one roll of dough in the freezer and it came in very handy this week when I wanted to take cookies to a friend whose baby was in the hospital- we love you, baby Henry!
The second cookie was rugelach, a traditional Jewish cookie that I have wanted to make for a long time. The question is- which recipe to use? Dorie Greenspan has a recipe for rugelach with a chocolate filling but I wanted a more traditional nuts and cinnamon filling instead. The King Arthur blog wrote a very tempting post on rugelach last month and I decided to try that recipe instead. But baking day dawned and I had no sour cream on hand, so in the end I went with Ina Garten's recipe.
The recipe is well-written and was a joy to make. The cream cheese dough rolls out beautifully. I used orange marmalade instead of the apricot preserves, and there is simply no need to puree this in the food processor as the recipe suggests. Instead you can nuke it for a few seconds if needed to make the jam easier to spread. I skipped the sugar-cinnamon topping after the egg wash but otherwise followed the recipe closely.
Here are the rugelach- not bad for a first attempt. They taste fantastic- a rich flaky dough encasing a sweet nutty filling, and they are small enough that one or two make a satisfying accompaniment to a cup of tea. 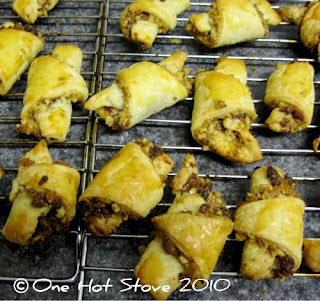 You have to be careful to tuck in the ends securely when you roll the pastries; I had a couple of them open up while baking and it resulted in these little pizza slice-like cookies. 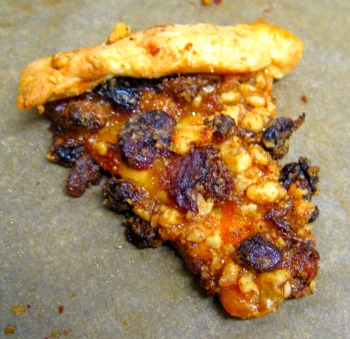 I sent some of the rugelach over for V to share with his colleagues. One of them is a Jewish lady from Russia (which means rugelach are part of her tradition) and she wrote me a sweet e-mail telling me she loved them and could she have the recipe. An Indian woman living in St. Louis making rugelach for an Eastern European friend- I got a kick out of that.

Finally, the glazed roasted nuts- I participate in swaps on Ravelry where knitters send gifts to each other, and in one of these wonderful packages, a knitter named Linda sent me a bag of these nuts along with a recipe card. They are addictive little snacks and we enjoyed them, so I made a mental note to try the recipes around the holidays. The recipe calls for pecans but I used equal parts pecans and walnuts. 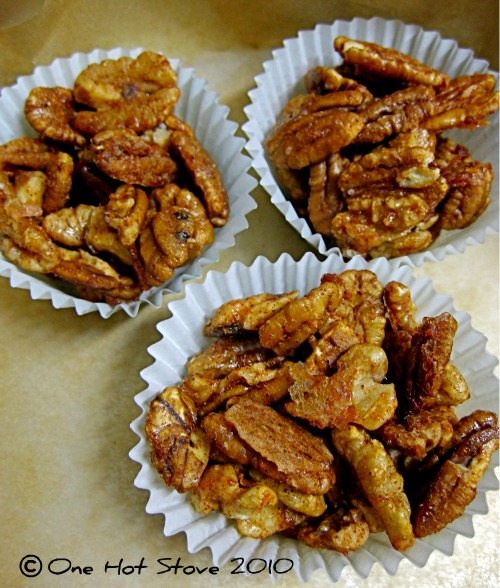 3. In a small bowl, mix together


4. In a bowl, whip 2 large egg whites until foamy. I did this by hand with a whisk.
5. Gently stir in the spices and 5 cups total of raw pecan and walnut halves. Be careful that the egg whites stay as foamy as possible while mixing.
6. Spread the nuts in a single layer on the baking sheet and bake for 15 minutes.
7. Turn the oven down to 250 F. Rotate the sheet and continue baking for 15 more minutes.
8. Let the nuts cool completely. Store in an airtight container.

Here is the box of festive cheer, ready to be delivered. 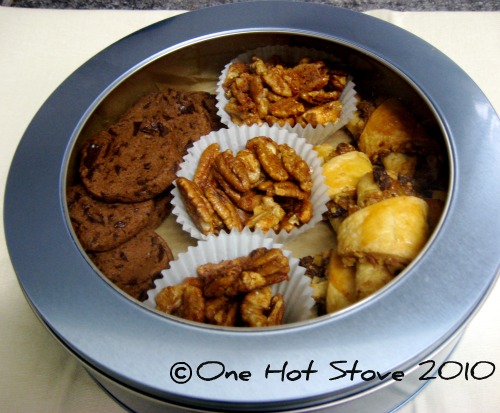 Merry Christmas to all who celebrate it. Wishing everyone Happy Holidays during this last fortnight of 2010.
Posted by Nupur at 10:37 AM