We had a cozy pizza & cake party on the holiday weekend. Chocolate and peanut butter seems to be an ever-popular flavor combination around here, so I dug into the bookmarks and found the perfect recipe to try- peanut butter cup chocolate cake from Baking Bites. The recipe looked suspiciously simple. Aren't layer cakes supposed to be a pain to make?

To make it just a bit more complicated, I decided to make some crunchy candied peanuts as a topping for my cake. The recipe is from David Lebovitz and I followed it quite faithfully. In a heavy metal pan went raw peanuts (with pink skins on, the ones I buy in the Indian store), sugar and some water. Then it is a matter of stir, stir and stir again for nearly 30 minutes until the peanuts are coated in dark caramel and some grainy sugar. A final generous sprinkle of sea salt, cinnamon and red chilli powder, and the candied peanuts were poured onto a baking sheet to cool off.

We used some for the cake, as you will see later, and the rest became a too-tasty, addictive snack. 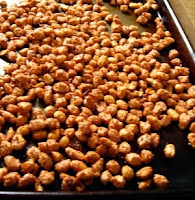 Now for the cake, which happens to be eggless, and the whole thing, cake and frosting, only used a stick of butter in all. Nice. Again, I followed the recipe closely. My only modifications: 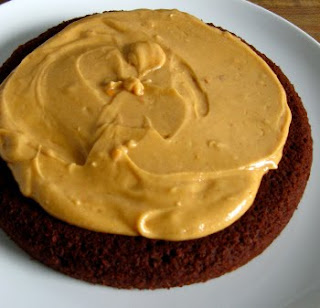 ...slap on the other layer. Drizzle generously with melted chocolate (I used a combination of milk and dark) and scatter the candied peanuts. 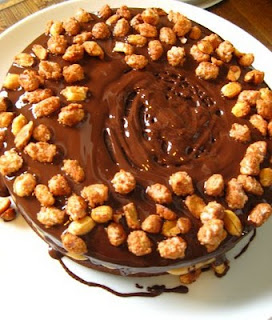 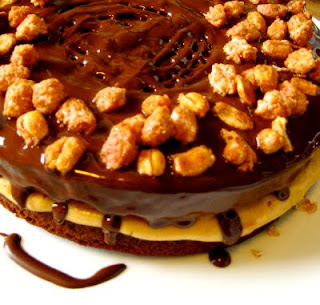 Gooey, messy and oh so good. With this cake, I can finally use the words "layer cake" and "quick and easy" in the same sentence. This one is a keeper.


* * *
I've loved participating in food blog events ever since I started writing this blog. Now, Jacqueline has started a great new website to keep us all informed about the fun events being hosted every month- it is called The Food Blog Diary. I want to thank her for including the Blog Bites: Sandwiches and Wraps in the July line-up.
Posted by Nupur at 6:34 PM