I feel like I am living in Sleepy Hollow. Does anyone remember Sleepy Hollow, the horror movie? I don't remember anything about it except that the village was perpetually swamped in a dense fog in that movie (oh yeah, and some headless guy was riding around in the swirling mist).

Well, St. Louis has been enveloped in a dense fog for days now, and in the middle of the sickly weather, V has a nasty cold of the sneezing, sniffling, hacking variety. Where cutting edge medical science can do nothing about the rhinovirus, the old-fashioned route of "food as medicine" often works, and we have been eating lots of soups and soupy khichdi lately.

Last night, I made up this soup as I went along and we were very pleased with the results, so I decided to write up a quick recipe here. With flavors borrowed from Thai cuisine, this pot of soup goes to the soup-and-salad challenge No Croutons Required where the theme for January is Thai cuisine.

The aromatic, soothing ingredient here is lemongrass; I have a pot growing at home that I bought from Bowood Farms last summer. A whiff of the sweet, citrusy aroma of lemongrass pierces though clogged sinuses and makes one go ahhh.... 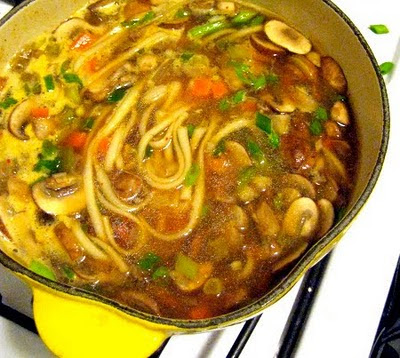 2. Add 3-4 cups mushroom stock/vegetable stock/water and a tsp. or so of minced lemongrass (this post has great tips on working with lemongrass) . Bring to a boil.

3. Stir in a heaped tsp. of Thai red curry paste (or more or less to taste), 1 tsp. sugar and some soy sauce if the soup requires salt (taste first). Add a handful of dry (uncooked) udon noodles.

4. Let the soup simmer for 10 minutes or so, until the noodles are tender.

5. Turn off the heat and garnish the soup with the green parts of the green onions, cilantro and lime juice to taste.

This is such a slurpable soup! The noodles plump up with all the aromatic flavors, and add some heft to the broth.