The quest for whole-grain breakfasts continues as I travel around the blogs learning some new recipes, tips and tricks. 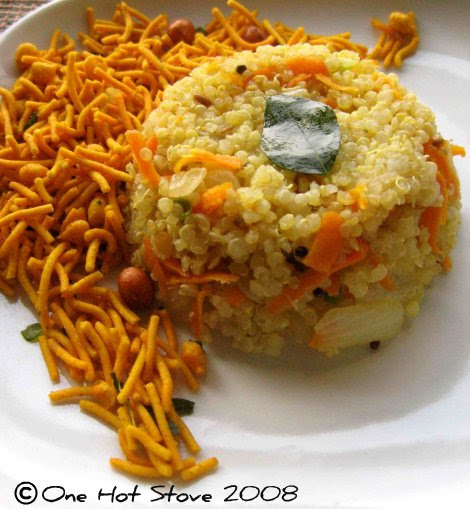 It took a long time for quinoa to become part of my pantry for the simple reason that it takes me some effort to make space for new foods! Going by the old saying, "When in doubt, make upma", I followed Suganya's recipe to the T. Again, I can't let my breakfasts get too healthy, can I? So I balanced the utterly nutritious upma with some spicy mixture on the side. Quinoa has a wonderful flavor; to me it tastes more like corn than anything else. It would be just wonderful in a soup, like in this recipe, or in a salad or these croquettes. If you have tried and liked quinoa, would you care to tell me your favorite way to cook it? 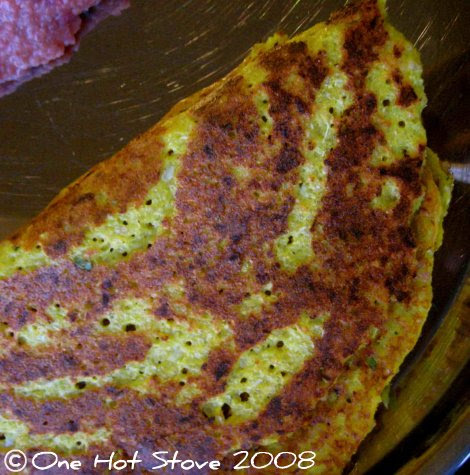 Vaishali, you had me at "golden"! Again, I used brown rice for this recipe but otherwise followed it closely. A couple of hours of soaking the dals and rice, and then I used the food processor to grind the batter for this adai, which made it very easy to blitz some cabbage leaves, ginger and curry leaves into the batter in the last few seconds of grinding. This nutritious adai made for a quick and light supper. Guess who loved this adai and kept begging for more? Dale, that's who! He seems to have guessed that the recipe came from the kind, animal-loving Vaishali. 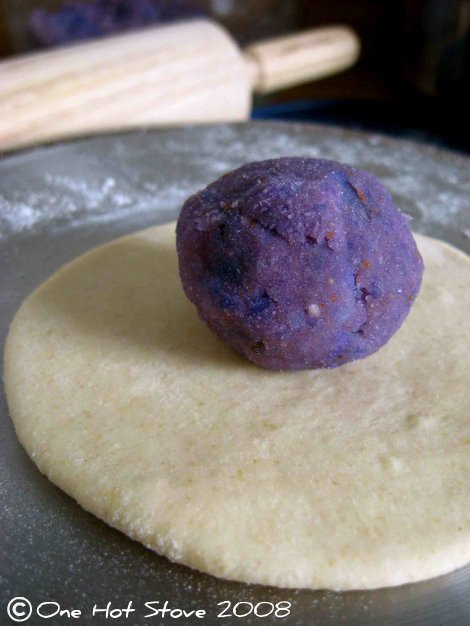 Most paratha recipes call for a good amount of fat in the dough and for cooking the paratha on a griddle; this Sanjeev Kapoor recipe adds a bit of milk and yogurt to the dough and makes it possible to cook the parathas with no more fat at all. I made the dough as directed, and used low-fat versions of both milk and yogurt. This time around, I used lightly spiced purple potatoes for the filling. 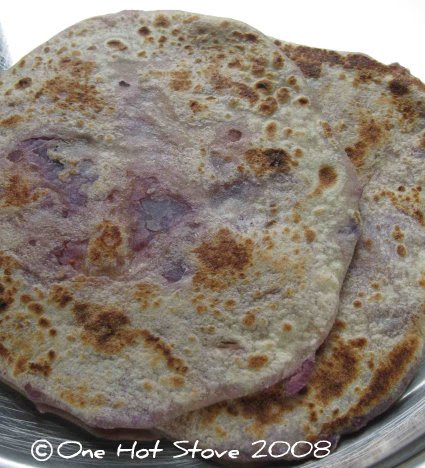 While the purple potato parathas looked pretty enough, it was not such a great idea after all! I found that purple potatoes are quite mealy and I did not really like the way they tasted in the paratha (too powdery, somehow). I will sticky to waxy potatoes for paratha filling in the future. 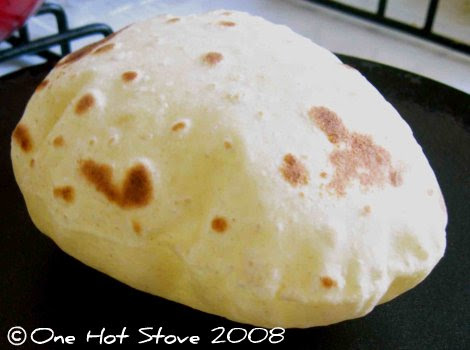 But the exciting thing is that the oil-free business works like a charm. I used the rest of the dough to make plain phulkas- they browned beautifully without a drop of oil, and puffed up on the cast-iron skillet with no coaxing at all. This one stayed puffy for several minutes while I abandoned it to go find the camera and record it for posterity! 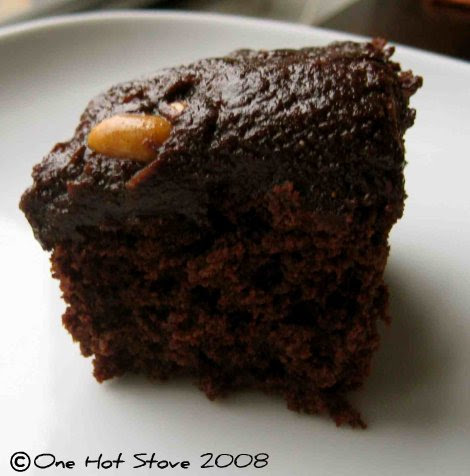 Their post made me weak in the knees and I became quite obsessed with trying out this recipe. Finally, on Monday morning, I woke up at the crack of dawn and starting pulling out baking ingredients from the shelves like a woman possessed. Baking (and eating) chocolate cake on a Monday morning- am I living on the edge or what? :D
It is a wonderful recipe, and I finally got to use my stash of whole-wheat pastry flour. The frosting is to die for! I had two minor gripes with the way I made this cake (I made a 8x8 sheet cake instead of cupcakes). First, I think using the apple cider vinegar that I used had too strong a taste of its own, because I could taste it faintly in the batter. Next time, I will use white vinegar instead. Also, I over-baked the cake just a tad, and it became quite crumbly as a result. But all in all, this recipe is a keeper.

*** *** ***
Dale is almost back to his normal energetic self these days. I never thought I would be so happy and relieved about being dragged unceremoniously through the neighborhood again. The first item on his agenda every day: a visit to his buddy Tony, who runs the newspaper stand on the corner. Tony has a big heart and a deep love for the four-legged denizens of the neighborhood, and the dogs love him right back. Dale has this hilarious habit of jumping up at the counter to say hello to Tony... 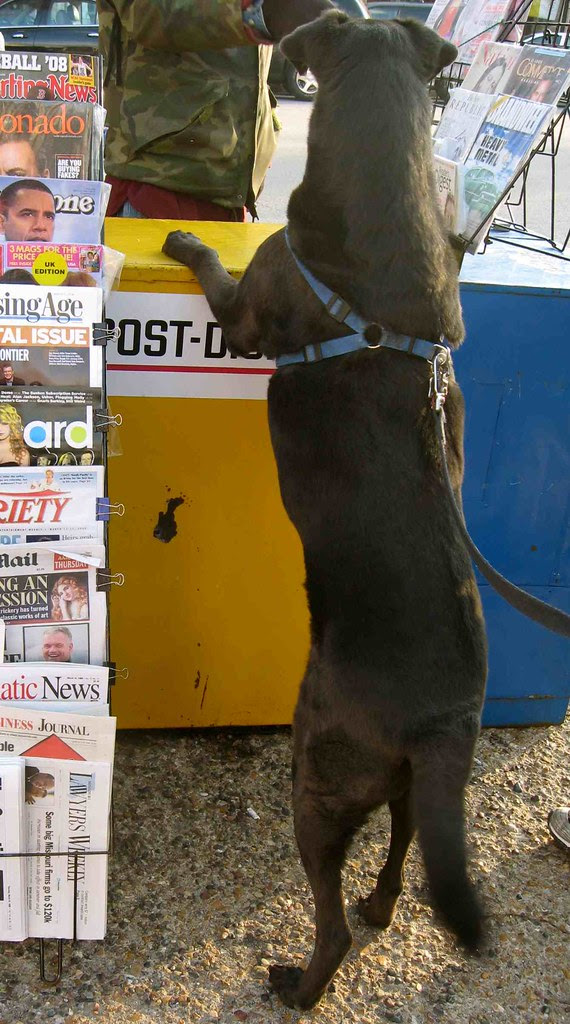 ...and he proceeds to beg for demand treats. Tony keeps a few different kinds of treats at hand, and Dale is not shy about pointing (I kid you not) to the fanciest ones! 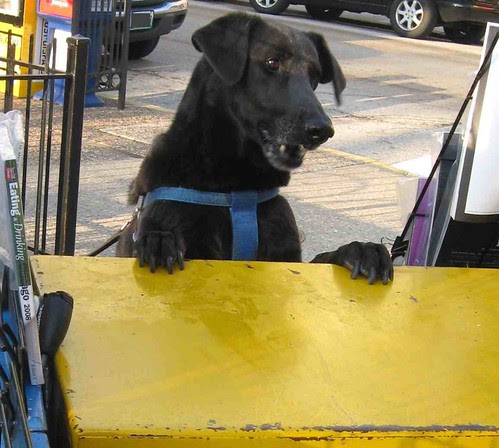 *** *** ***
I'll leave you with a feast for the eyes: A beautiful photo-essay from A Life (Time) of Cooking, on eating off banana leaves in India.

Have a great weekend!
Posted by Nupur at 6:20 AM