A few weeks ago, as we were relaxing at home in the evening, the doorbell rang and I nearly jumped out of my skin. It was only some friends dropping in but the reason for my startled jumpy response was a simple one: no one *ever* comes to the door here. This is in stark contrast to homes in India, where my general experience is that there is not a moment's silence from dawn to dusk as a procession of tradespeople arrives at the door in a never-ending stream. I think my Grandmother's home in Bombay is an extreme case, where, at some point, my grandmother and aunt got tired of the jangling doorbell and now just prop the door open all day. From the dudh-walla (milkman) and the paperwalla (newspaper guy) heralding the start of a new day, to the phool-walli (flower-lady) who comes bearing fragrant flowers and garlands for the evening puja, life hums along to a steady beat in that home. Some folks want to conserve energy and avoid making the trek to the 4th floor walk-up apartment, so they will just holler from the street below. Then someone rushes to the balcony and leans over and discusses the transaction. For instance, the fisherwoman, Leelu, will arrive around mid-morning with a basket of fish balanced on her head and a sparking diamond ring flashing in her nose, stand on the street outside and yell out my aunt's name. My aunt will yell back and ask her what fish she has today, and after much yelling back and forth, Leelu might either climb up or my aunt will send one of her kids down to seal the deal. My mother tells me that my Grandmother (a confirmed carnivore) even had a muttonwalla come to the door for several years! Aai always has a look of horror when she says this, partly from memories of fresh meat being hacked to pieces at the front door, and partly from sheer consternation at meat being sold from door to door out of an open basket in a hot and tropical city. Notwithstanding food safety rules and regulations, I don't think anyone ever got sick from eating the stuff. One person who can be counted on to show up every day is the pav-walla, bring along slabs of bread called laadi pav, which have a cripsy crackling crust and an airy and ridiculously soft interior. Halved pav with soft salty Amul butter slathered inside. Living halfway across the globe from Bombay, now that's the stuff that money can't buy.

I won't lie to you: I don't think I could survive the relentless cacophony of that sort of life, and like my peace and quiet, thank you very much. But to have fresh bread, fruits, vegetables, flowers arriving at the doorstep- that would be quite a treat, wouldn't it? More than anything, it is the relationship that grows between you and the person bringing you the food; my aunt is very particular about treating these folks as extended family. They in turn always bring her the best of everything.

OK, you think I have rambled on enough for one post? Here is my attempt to make some of that laadi pav at home. This post on Jugalbandi is a must-read essay about this incredible bread that Bombayites know and love. I tried to make my imitation pav using the Tender Potato Bread recipe from the Daring Bakers. I had used that bread recipe to make khara buns, thanks to Shilpa, and was struck by the pav-esque quality of the bread. Hence this attempt.

I would not call this an easy recipe. This dough is difficult to handle- it is extremely sticky. But the whole process was really enjoyable for me, with lots of therapeutic kneading involved. Although it is called potato bread, there really is only 1 large potato for 18 hearty rolls, so it is not potatoey by any means, but the presence of the potato yields beautiful results in terms of texture. I also used this dough to make pizza crust and I am afraid it did not work so well; the dough is a little too soft and sticky for that (maybe it needed a bit more flour). I would *strongly* suggest reading Tanna's detailed post for many helpful notes about this recipe. The potato bread posts from the Daring Bakers will likewise provide insights from hundreds of home bakers who have tried this recipe. We can learn from their experiences! I have adapted the recipe so that nearly half the flour is now whole wheat, and have halved the recipe. I loved the fact that the recipe made exactly 2 slabs of pav using pans that I have on hand. 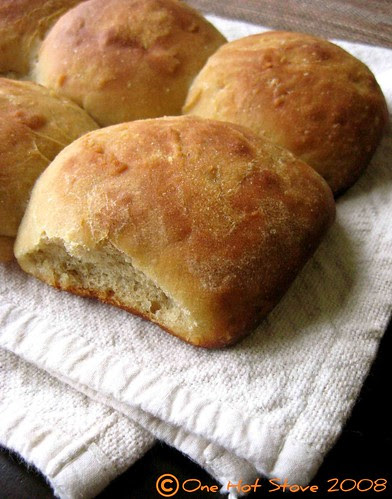 (Adapted from Tanna's post, Recipe from Home Baking: The Artful Mix of Flour & Tradition Around the World by Jeffrey Alford and Naomi Duguid, makes 18 rolls)
Ingredients:
1 large baking potato (the floury kind)
0.5 T + 0.5 t salt
1 t active dry yeast
0.5 T butter, softened
2 C + 0.5 C all-purpose flour
2 C white whole-wheat flour
Method:
1. Combine the 2 C AP flour, 2 C W-WW flour and 0.5 T salt in a bowl and set aside. Keep the 0.5 C AP flour separate.
2. Wash, peel and chop the potato. Combine potato, 2 C water, and 0.5 t salt in a saucepan and bring to a boil. Simmer until potato is very tender. Strain the potatoes and place in a large bowl (save the cooking water). Mash the potatoes finely. Measure out 1.5 C of the cooking water and add it to the bowl.
3. Let the mashed potato-potato water cool down almost to room temperature (or barely warm), then stir in the yeast. Leave aside for 5 minutes.
4. Stir in 0.5 C AP flour into the yeast mix and set aside for 5-10 minutes.
5. Mix in the softened butter, then stir in about half of the flour mixture a little at a time, incorporating it well.
6. Turn the dough onto a floured surface, then add the rest of the flour slowly, kneading well. It takes 10-15 minutes of kneading to result in the final dough.
7. Place the dough in a clean bowl, cover and let it rise for 1.5-2 hours, until doubled in volume.
8. Take 2 buttered pans- I used a 9X13 rectangular one and an 8X8 square one. Knead the risen dough for a couple of minutes, then divide it into 18 equal portions (First into 2 portions, then each into 3 portions, then each into 3 portions again).
9. Form each portion into a compact ball. Arrange 12 balls in the larger pan and 6 balls in the smaller one. Cover the pans and let the rolls rise again for 35-45 minutes.
10. Brush the top of the rolls with olive oil. Bake in a 400F pre-heated oven for 15-20 minutes or until the rolls are golden brown. Serve right away! 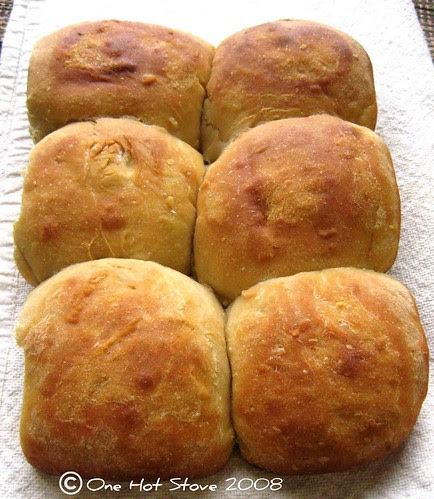 Vegan version: Use vegan margarine instead of butter.

We enjoyed this laadi pav with (what else but) pav bhaji. These rolls would also work beautifully to make my other favorite street foods, such as vada pav and to soak up some flavorful misal, and something called dabeli, which I will post soon. I also love eating fresh pav dunked in any spicy curry such as chana (chickpea) masala, as a change from the usual pairing with rotis and rice. Needless to say, these rolls would be perfect for making all kinds of sandwiches, whether they are Indianized or not. If you have any left over, the rolls toast beautifully.

I think I might be falling in love with potato bread. Yikes! Luckily, Tanna is doing a whole series of different types of potato breads on her blog, and I can't wait to try them. Homemade bread, whether yeasted or of the flatbread persuasion, is such good fun. And good eats.

*** *** ***
My project this month is to make the crisp and hollow puris that are used to make pani-puri. I'd like to ask you all: Have you ever tried making these at home? What recipe did you use and what was the experience like? How did they turn out? Any advice is much appreciated. Thank you!

I'll leave you with my Daily Tiffin post for January: The Simpler Life.
Posted by Nupur at 9:26 AM