This post is part of the 7 S series: Soup, Salad, Sandwich, Snack, Street food for Sunday Supper. These are light(er) meals for Sunday night; a tasty way to end indulgent weekends and get ready for a new week. A way to use the vegetable goodness brought home on Saturday mornings. A chance to try something a new recipe, a new ingredient or a new cuisine every weekend.

Today we are enjoying my favorite kind of dinner- making a meal out of appetizers. Filling up on snacks. Potstickers are a Chinese take-out favorite here in the US. Basically, these are cute little dumplings plumped up with a tasty filling. They can be steamed or boiled or fried...or pan-fried, and this last one is generally called a potsticker or gyoza.

The new addition to my pantry this week is dumpling wrappers: paper-thin discs of flour that make it a snap to put together home-made dumplings. At least, I was seeking dumpling wrappers. All I could find that day was square wonton wrappers, and decided to go with these instead. Dumpling and wonton wrappers can be found in either the refrigerated or the frozen section in "gourmet" food stores and international markets, and certainly in Chinese grocery stores. They are quickly becoming mainstream enough to be stocked in many regular supermarkets too. Here is my first attempt at making dumplings. Cabbage and other greens are traditional vegetarian dumpling fillings. I used my favorite combination of spinach and mushrooms, and added some soy crumbles (also sold as TVP, i.e., textured vegetable protein, or Nutrela granules) to mimic the minced pork that is filled into meat dumplings.

Making the filling: In a small pan, heat 1 t peanut oil. Saute 2 minced cloves of garlic, 2 packed C finely chopped fresh spinach (can use frozen) and 5-6 finely chopped mushrooms. Cook, uncovered, so that the mixture does not become watery. Season with salt and pepper. Stir in a big pinch of red pepper flakes (optional) and 1/2 C soy crumbles. Turn off heat, then add 1 drop ginger extract (or add minced ginger along with the garlic), and a few drops of toasted sesame oil.

Filling the filling into the wrappers: With the round dumpling skins, you just fold down the middle to get a half-moon shaped dumpling. With my square wrappers, I tried it two ways: to get triangular dumplings... 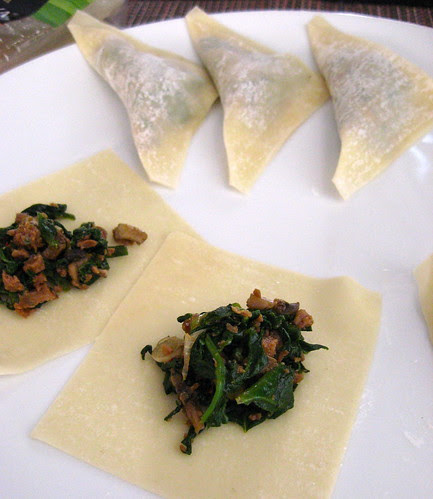 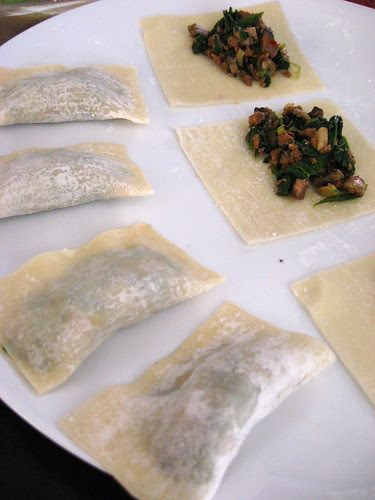 In each case, moisten the edges of the wrapper with some water, place a teaspoonful of filling inside and seal the dumpling by pressing the wet edges together.
Pan-frying the dumpling: This is the "potsticker" bit, resulting in part-fried and part-steamed dumplings. Drizzle 1 T peanut oil all over a wide pan and heat it. Place the dumplings in a single layer in the pan. Fry the dumplings, with the pan uncovered, for a few minutes on one side only, until the underside gets a lovely golden-brown surface. Now, add 2/3 C water to the pan (stand back, it will sizzle!) and cover the pan. The steam created in the pan will steam the dumplings. Once all the water has vaporized, and the dumplings appear cooked and transluscent, remove them from the pan and serve them right away with your favorite dipping sauce (I made this one by mixing soy sauce, honey, ginger, scallions and a few drops of toasted sesame oil). 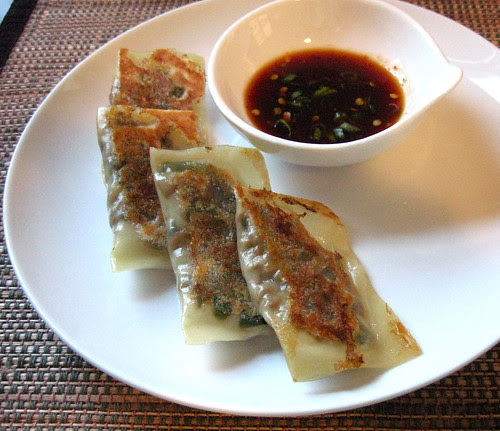 These potstickers made for a wonderful meal in a Bet You Can't Just Eat One way! Uncooked filled dumplings can be frozen for future use. Just freeze them on a baking sheet so that they do not stick to each other; once they are frozen solid, they can be bagged/ boxed. I still have some wrappers left over and intend to use them either to make wontons (little dumpling purses) for wonton soup, or to make ravioli. 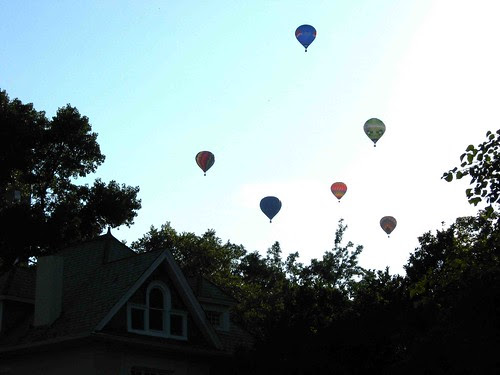 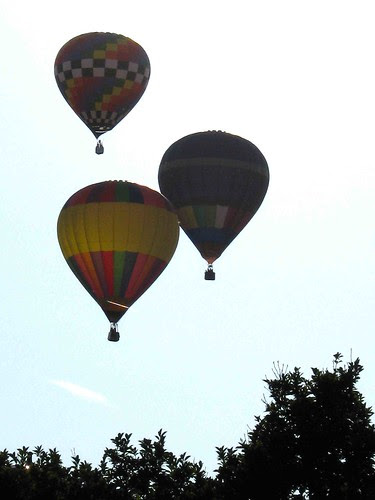 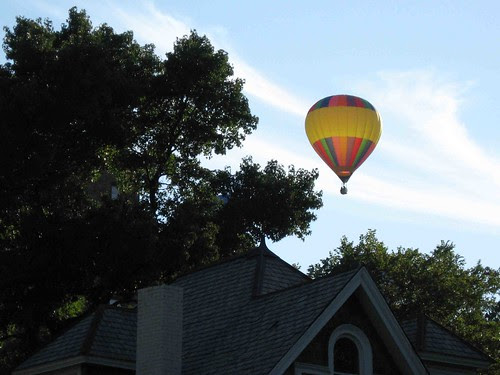