I is for Idli with Vegetables

The "I" of Indian Vegetables

The letter I inspired twelve incredible Indian flavors! It is a difficult letter to come up with foods for, and I'm so amazed at the creativity of the participants. When I complained about the lack of I vegetables to V, he immediately said, "Well, there is iceberg lettuce. You could make iceberg lettuce wrapped around some grilled paneer tikka or something". Hmm...I don't give the man enough credit :) I was amused and impressed all at the same time.

To start off, two I vegetables...

First up, the tapering, crunchy, fluorescent green Italian Peppers, also called Cubanelle peppers. New food blogger Sapna of Indian Monsoon cooks these Italian Peppers, Indian Style in a delightful stir-fry using both chickpea flour and peanuts to add panache to the dish. Read the post to find out why she would call these peppers salad mirch in India!

Next comes Imli or tamarind. Many cuisines prize the fruit of the tamarind tree for its tangy pulp that is used to flavor everything from the Indonesian pad thai to Indian chaats to Worchestershire sauce! But Suma of Veggie Platter takes it one step ahead. She uses the *leaves* of the tamarind tree (imli ke paththe in Hindi) and makes a delicious and tangy Imli ke Paththon ki Dal.

Up ahead, we have a complete brunch buffet, for one of India's most popular breakfast foods is an "I" food, the Idli. The most well-known idli starts with a fermented batter of ural dal (split black lentils) and rice, steamed to perfection in little molds. Here we have four different veggie-fied variations of the ever-beloved idli!

A popular variation of the idli is the rava idli, also called the instant idli because it does not require fermentation, made with semolina/rava/cream of wheat. Asha of Aroma/Foodie's Hope tweaks the recipe by adding chana dal, carrots and green peas, and cooks up some colorful and nutritious Idlis with Chana Dal and Vegetables.

Usually, idlis are made with a big batch of batter, and it is quite common to have some left over. What do you do with them? Here are two innovative ideas for recycling those leftover idlis into tasty preparations!

Suma of Veggie Platter takes the bland steamed idlis and jazzes them up with some vegetables, nuts and seasoning to make a delicious Idli Upma.

A very innovative use of leftover idlis is Idli Manchurian by Swapna of Swad. Small squares of idlis are batter-fried, then dipped into a green pepper-green onion sauce in the typical tasty style of Indo-Chinese fusion cuisine.

Remember Prajakta, who mailed in her entry for green tomato chutney last week? This week, lo and behold, she has her very own food blog, called "swaypakghar" (the Marathi word for kitchen)! So here we have Prajakta of Swaypakghar using the Idli Rava, ground rice that is typically used for making idli batter, to make delicious savory pancakes called Idli Rawyache Appe.

Let's not forget that I also represents a magic word in the dictionary of the busy cook: Instant! Don't get me wrong; I am completely willing to make time-consuming and involved dishes, but every so often, life gets busy and demands that we have some "instant" recipes tucked away in our repertoire. The pressure cooker is one reliable route for instant (not to mention fuel-saving and nutrient-conserving) meal prep. Richa of As Dear As Salt shares a delicious recipe for Instant Pineapple Jam (complete with a Marathi transliteration) using only pantry ingredients and a short amount of time!

And now for four regional specialties...

Bee and Jai of Jugalbandi come up with a beautiful bowl of Istu, a creamy coconut-based vegetable curry. You probably guessed it, but Istu is the Malalayam (the language of Kerala) version of the English word "stew"!

Sheela of Delectable Victuals makes her favorite comfort food, Idi Chakkai. She explains that Idi Chakkai translates as "pounded jackfruit" and this milk curry of tender raw jackfruit certainly looks comforting to me!

Sigma of Live To Eat also goes back to her roots in Kerela and talks about Ilaneer, which means tender coconut water in Malayalam. If you have ever tasted the tender drink from the coconut, you know that it is a little taste of heaven! Sigma mixes up the tender coconut water into a sweet and refresing Ilaneer Drink that looks just perfect for the summer months ahead!

Linda of Out Of The Garden does some clever culinary research and found that irulli means "onion" in Tamil! She promptly goes on to mix some Indian flavors into the New England classic combination of apples and onions and comes up with a delicious dish of Fried Onions and Apples!

Breakfast is certainly my favorite meal. In stark contrast to those folks who are loathe to consume anything more solid than a cup of coffee before noon, I can put away vast quantities of food at six in the morning. And it does not have to be traditional breakfast fare either, leftover dinner suits me just fine. But I do have one picky issue: I don't really like sweet foods for breakfast. Lucky for me, traditional Indian breakfasts fit all my criteria: they tend to be both heavy and savory.

Since we are all trying to eat several servings of vegetables through the day, I love the idea of eating vegetables at breakfast to give a head-start to the day's veggie consumption. Traditional Indian breakfast dishes do offer plenty of ways to do this. Here are some examples of breakfast eaten in different parts of India:

In the North of India, a predominantly bread-eating region, you are likely to find parathas for breakfast. We talked about parathas quite a bit during the gobi paratha post. Parathas stuffed with vegetables (potatoes, cauliflower, mixed vegetables) are served with yogurt and a spicy tangy pickle. If you were to chop up some salad vegetables (cucumbers, tomatoes, carrot, radish, onion) and stir in some yogurt and cumin to make a raita, the combination of stuffed paratha and raita is both filling and nutritious!

In the South of India, breakfast is dominated by foods made with a fermented batter of urad dal and rice: idlis, dosas and all their delicious variations. Typically, these will be served with a coconut chutney and sambar, an aromatic dal with vegetables. In my mind, the fluffy steamed idlis served with a vegetable sambar represent one of the most wholesome breakfast foods on this planet. This combination has very little added fat, but is packed with nutrition and taste. I really wanted to make idlis for this segment (and I confess, it was about the only "I" food I could come up with), and googled vegetable idli. The recipe that follows is pure experimentation based on ideas gleaned from a variety of recipes online.

Tiny diced vegetables are sauteed lightly, then sandwiched between dollops of idli batter and steamed. The result is a colorful and tasty variation to the idli. I think the presence of tiny dots of colorful veggies would make this idli quite appealing to little ones. A word of warning to first-time idli-makers: idli, at least soft and fluffy ones, may need a combination of luck and experience to perfect. The exact consistency of idli batter is crucial, and nearly impossible to describe in words. I use my mom's idli recipe for the proportions, but tips from Dakshin helped me a lot in creating soft idlis. 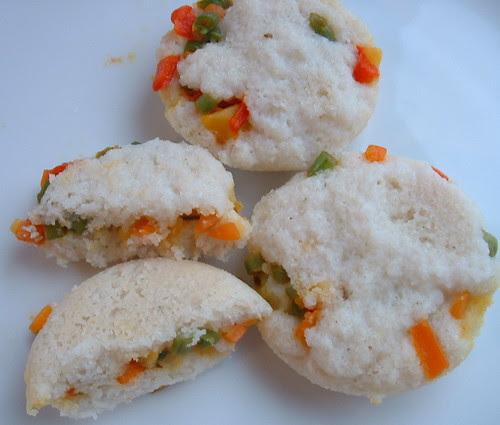 (makes about 32 idlis, serves 6-8)
1. Make the filling: heat 1 tsp oil, then temper with 1 tsp cumin seeds. Add 1 cup mixed finely diced vegetables (I used boiled potato, carrot, red pepper, green beans) and saute for a few minutes until barely tender. Season with salt, turmeric and red chili powder. Set the filling aside.
2. Soak 1 cup urad dal overnight in warm water. Drain it (catch the soaking liquid in a bowl) and place it in the bowl of a food processor along with 1 tsp fenugreek seeds. Process the urad dal to a very fine paste, adding some of the soaking liquid if required. It should be very thick.
3. Soak 2 cups idli rava (a special sort of cream-of-rice) for 30 minutes in warm water. Drain most of the water.
4. Mix the urad dal paste, soaked idli rava and 1 tsp salt until well combined. Cover and leave in a warm spot to ferment (I usually need 10-15 hours).
5. When the batter appears fluffy and risen, you are ready to steam the idlis.
6. Grease the idli molds using non-stick spray. Do not mix the batter at all, but scoop it gently into the idli molds. The bubbles trapped in the batter will make the idlis fluffy, so be gentle. To make stuffed idlis, put a half-scoop of batter to cover the bottom of the idli mold. Add a tsp of vegetable filling, then cover with another-half scoop of batter. The picture shows the first half of the batter topped with the filling (in the ugly yellow light of my kitchen). 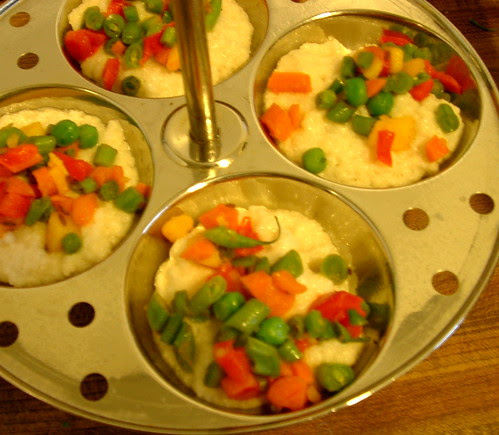 7. Steam the idlis for 15-20 minutes or until an inserted toothpick comes clean. 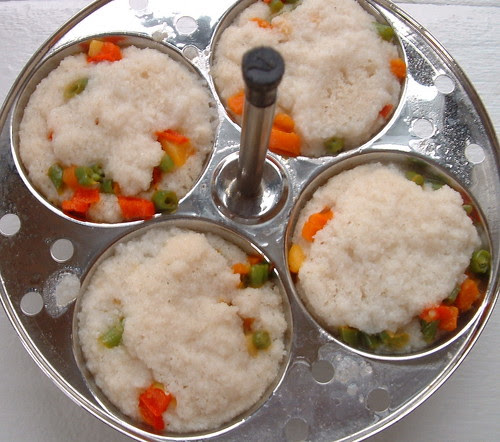 Variations on a theme
1. This potato-Stuffed Idli from Foodlovers looks delicious!
2. You can, of course, omit the vegetable stuffing and make plain idlis. Try halving steamed idlis and sandwiching them with some vegetable filling or a chutney.

How do you serve this dish?
1. Traditionally, idlis are served with sambar. See sambar recipes from bloggers: Annita, Manisha, Chaipani, and me.

Fellow bloggers have come up with many delicious ways of sneaking in vegetables for breakfast. Here are some of my favorite finds:
Dalia Ravivar from A Mad Tea Party,
Veggie Poha from The Daily Tiffin,
Vegetable Uthappam from Sailu's Food,
Besan ka Cheela from Sugar and Spice,
Methi Matar Paratha from Keep Trying,
Cucumber Pancakes from Food For Thought,