Almost every culture has some days when a "fast" is observed...a days when the intake of regular food and drink is restricted, a day of religious observence and prayer. When I was growing up, there were several days of the year which were thus observed. Luckily for us, the rules were rather relaxed: although a great many everyday foods like rice, onion, turmeric were forbidden, there was an equal number of foods that were "allowed" and they made for many delicious dishes indeed. We kids certainly ended up eating twice as much on "fast" days ;)
Sago (called sabudana in the local language), or the pearls of the sago palm, is one food that is eaten on these fast days. I'm not religious at all but I love eating preparations of sago and often make sago khichdi for breakfast any old day of the year. This is what the pearly white sago looks like: 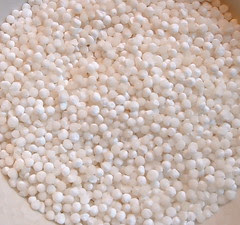 Looks pretty innocent, but its very easy to mess up sago preparations! All recipes call for soaking the sago to rehydrate it and if this is not done right, you end up with a gummy disaster. In addition, the sago is tasteless almost and needs careful seasoning. Making sago khichdi is an art and I would love to share a couple of tips I have learnt.
*Soak 1 cup of sago by placing it in a bowl, then rinsing once with water, then adding enough water to just cover the sago in the bowl. Cover and leave overnight. This results in perfectly fluffed sago. I was visiting my friend C's lovely lovely place in Goa last December when her mom visited and shared this tip with me.
**Season the fluffed sago by adding 3/4 cup coarsely powdered roasted peanuts, salt to taste and 2 tbsp sugar. I know thats a lot of sugar but its a trick taught to me by a lovely lady known as "tai"...she made a mean sago khichi and shared this tip of bringing out the flavor by adding lots of sugar. Tai passed on last month but her culinary legacy will live on and on.
*** Saute a tsp of cumin seeds in a pan containing {1 tbsp oil + 1 tbsp ghee...or just 2 tbsp oil}. Add 3-4 slit green chillies and one diced potato. Cover and cook till potatoes are tender. Then add the seasoned sago and saute for 5-7 minutes, cover and cook for another couple of minutes and taste for seasoning. Finally, garnish with minced cilantro and sprintz on some lemon juice and you are done! This is fast food in more ways than one! 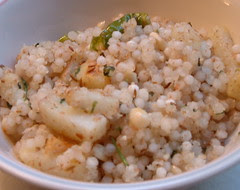