Just last week I was reading the February 2005 edition of Martha's "Living" when the dessert of the month made me gasp! That very day, I saw that Life in Flow has decreed that the SHF#9 shall be Tantalizing Titillating Tempting Tarts and right away I put two and two together...I would use Martha's idea of rosy apple tarts. The pastry shells filled with cream and topped with roses fashioned from apples ended up looking too good to eat. Rosy Apple Tartlets
(adapted from Martha Stewart "Living" Feb. 2005)
Step 1: Poach the apples: Bring to a boil in a small saucepan 1 cup sugar, 2 cups water and 1/8 cup fresh lemon juice. While the mixture is boiling, take 2 red apples and core them. Rub the exposed flesh with lemon wedges to avoid browning. Use a mandoline to cut the apples cross-wise into thin slices. (I tried doing this with a knife but that did not work well. You need a really sharp knife and even sharper cutting skills to achieve this with a knife. So the mandoline gifted by my mom during my last visit to India came in very handy). Once the syrup has boiled, take it aside and place apple slices into it. Cover the surface by placing a parchment paper directly on it (I don't know why this is done but Martha said it had to be done and thats good enough for me :)). Let syrup cool down completely.
Step 2: Make the puff pastry cups, or as I like to think of them, the tiny "vases" for our rosebuds. Pre-heat the oven to 400 degrees F. Take a thawed sheet of puff pastry and cut it evenly into 12 rectangles. Press each rectangle into a cup of a 12-muffin pan and prick with a fork. Bake for about 12 minutes till pastry is golden all over. Cool the pastry cups.
Step 3: Whip up he filling...Whip a cup of heavy cream till soft peaks form. Into the whipped cream, fold in 3 tbsp of confectioner's sugar and a tsp of cinnamon. Spoon the cream into the puff pastry cups.
Step 4: Assemble the roses: Take a poached apple slice and cut into semi-circle, now twist it into the form of a bud, with peel-side facing you. Take another semi-circle and wrap it around the bud to make a bigger flower. The pictures probably shows you best how this was done. In school, we kids would make similar roses from pencil shavings (Thanks S for reminding me of this). The apple roses are simply tucked into the cream in the pastry cup. A garnish of tender basil leaves adds a nice contrasting color. Somehow the roses have this very pretty rosy color too...it could be the color of the red skin leaking off into the poaching liquid or the partial slight browning or reddening of the cut apples , or a combination of these two factors. 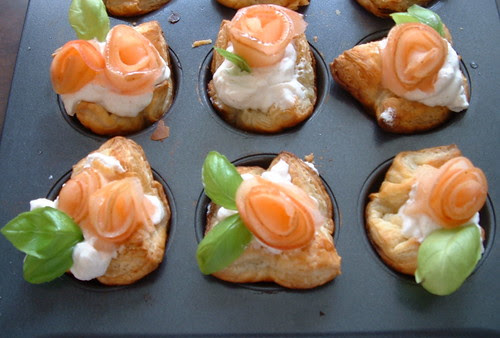 So what did this taste like? Wellll, like a mouthful of puff pastry to tell you the truth! The roses taste wonderful (sweet and lemony) and go very well with the cinnamon cream...but the puff pastry overwhelms the overall taste. So I won't be making the exact same recipe ever again. I will, however, make the roses often and use them as an adorable decoration for other desserts. Imagine a chocolate cake topped with roses and cream! They look like perfect decorations for bridal shower and baby shower confections.
This is what the roses in Martha's magazine looked like: 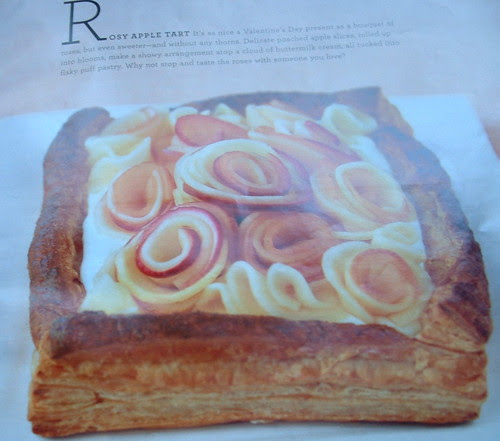 And my life has been rosy ever since I made these...just yesterday I went to the rose exhibit at the New York Botanical Garden and stopped by to smell some real roses! Its a beautiful life... 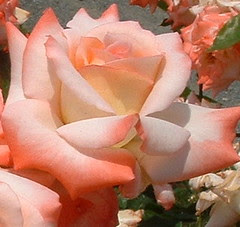 Please visit Life in Flow for a full round-up of Tantalizing Titillating Tempting Tarts!
Posted by Nupur at 5:23 AM