If you asked a hundred Indians what their favorite comfort food is, I would guess that 95+ would say "Khichdi". I certainly would! This soothing combination of rice and lentils is the food that lights up my memories. When I was growing up, it was the dinner served before starting on a journey. It was the dinner of monsoon nights, when sheets of rain would batter us. It was the thursday night dinner in my college dorm when everyone would eat khichdi and kadhi and pretend they were in the comfort of home. When there was a death in the family, neighbors brought in pots of khichdi to comfort and console.
The nourishing, healing, comforting powers of khichdi are universally accepted. Khichdi is the first solid that babies are introduced to. In a world far removed from Gerber's baby food, rice and lentils are simmered till mushy, seasoned with turmeric and salt and fed to infants to introduce them to "people food". Khichdi is the only food people eat when they are sick. The warmth and aroma of just-cooked khichdi perks up palates which are dulled by illness; maybe we should dub it "Indian Penicillin". Khichdi is a meal that is simmered in a single pot. It is the ideal food for campfires and soup kitchens. Khichdi is the food of the poor, a meal that is accessible even with the food budget stretched to its limits. Khichdi is the food of the rich, a showcase for the choicest vegetables simmered with a plethora of lentils and studded with nuts.

The word khichdi literally means hodgepodge or mishmash. Hodgepodge or not, khichdi makes for a complete one-pot meal. The rice provides the carbohydrates, the lentils provide the protein, the vegetables add the vitamins and minerals and fiber. A dollop of ghee (clarified butter) provides the right amount of fat and calories, which are as important in a diet as any other food group. All over India, there are as many recipes for khichdi as there as households. It can be spicy or plain, made with a single lentil or combinations of 2-5 lentils. Special khichdis are often made to celebrate special festival days. Traditionally, khichdi is served with a yogurt curry called kadhi. Khichdi-kadhi is the food of the masses, and the food of the gods. 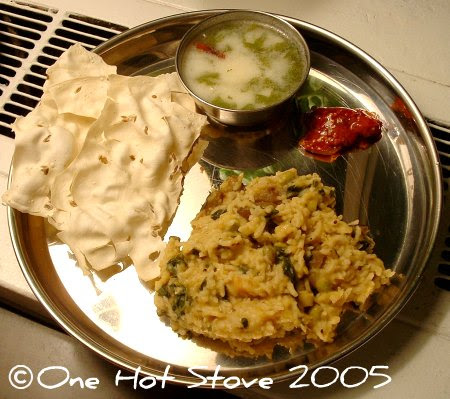 In keeping with the philosophy of khichdi-making, I will provide a method rather than a recipe.

The kadhi is made as follows:


I served the khichdi and kadhi with roasted papads and pickled vegetables, on a traditional Indian steel thali. This is the stuff food memories are made of.
Posted by Nupur at 7:49 PM