Vegetable Kadhi, and Many Doggy Pics

Among our favorite warming meals of winter- soups, dals and coconut curries- is the yogurt and besan (chickpea flour) based kadhi. My favorite style of kadhi is the mild, sweet, white Gujarati version but I haven't nailed down a recipe for it yet. Let me know if you have a good recipe for this style of kadhi. I've asked two close friends who happen to be Gujarati and they both claim that they don't like that sweet kadhi (ditto for the sweet Gujarati dal) and only ate it as kids when they were forced to. Sigh.

The current house favorite is this version, yellow with turmeric, with an aromatic tempering of several whole spices that just "makes" the dish. Basically you round up all the seeds in the spice cabinet and put 'em in there.

I add plenty of vegetables to the curry to make it a one-pot meal. This time I added carrots and those flat, broad Italian green beans (a freezer staple in my kitchen). Other vegetables that work well here: cauliflower, green beans, bell peppers, eggplant. 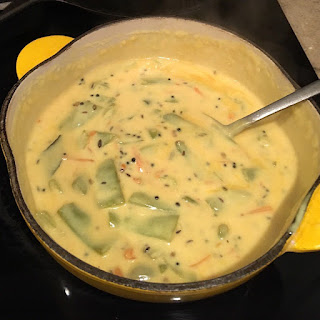 
3. Add salt to taste and about 4 cups vegetables. I used carrots and frozen Italian green beans (the broad flat ones).

Our beloved pup Duncan turned 5 in December. His predecessor Dale got plenty of airtime on this blog, being the only child and all, while Duncan is the poor neglected middle child (not really) and I rarely get around to featuring him here. This weekend was the Chinese lunar new year ushering in the Year of the Dog, so this is a good time to post a few pictures of Dunkie.

Dunkie is an extra large dog (tipping the scale at 103 lbs) with a heart that is three sizes too big. He is seriously patient with our toddler. "Guckie" (Dunkie) was one of Niam's first words. He even learned to stand up by holding on to Duncan. Our boy is all over Duncan in his clueless and overwhelming toddler enthusiasm.  Dunkie puts up with it, and if it gets too much, he just shakes off the toddler and walks away. We practice "gentle hands" on Dunkie at every opportunity.

Dunkie has discovered that there is an upside for having a pesky toddler for a brother. Niam demands "Guckie kee-koo" (Dunkie cookie) every few hours- meaning a cookie that he can hand-feed the dog. Plus there are lots of tasty table scraps raining down by the high chair at every mealtime.

Dunkie is our one dog petting zoo. Wherever he goes, people swarm around, asking to pet him. People always think he is some exotic breed and are shocked to hear that he is a rescued dog and a one of a kind mutt. In that way he is an ambassador for shelters everywhere which are full of beautiful dogs just waiting for a home. Here are some pics of Dunkie doing what he does best.


Enjoy the week! What are you cooking this week? Tell me about the pets in your life.
Posted by Nupur at 10:52 AM