Do you ever get the feeling that everything you make tastes the same? I occasionally feel that way for some of the dishes I make that are of the no-recipe variety- where I'm cooking on auto-pilot and toss in the spices and seasonings most familiar to me. Which is fine, but then the dal fry and the veg pulao kind of end up tasting similar.

Last week I decided to flip open a cookbook and look for a recipe for peas pulao. This particular dish was practically the first thing I learned to make; I think of it as the "little black dress" of Indian cooking because fits into more or less any Indian meal you serve to company. I just wanted to change up the flavor of my peas pulao a little bit.

The recipe I chose is Pattani Biryani (green pea biryani from Kongunadu) from the book Simply South by Chandra Padmanabhan. This cookbook was a gift from Nandita of Saffron Trail years ago and I've spent many happy moments flipping through it, but this was my first time actually cooking from it.

The Kongunadu referred to in the recipe is a geographical region- the Western portion of Tamil Nadu if I'm not mistaken. The little I know about this region's cuisine all comes from Indosungod's essay and recipes. We'll have to ask her if this is a typical Kongunadu way to make peas pulao.

This recipe uses fennel and mint, two flavorful ingredients that don't usually feature in my peas pulao. I'm not going to go looking for fresh mint in February so I used dried mint- this is one herb that works well in its dried form, I find. I modified the recipe somewhat, using a higher proportion of peas to rice, and adapted it to the rice cooker. We enjoyed the taste of this no frills dish. 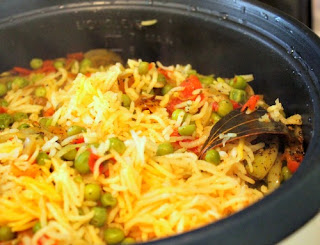 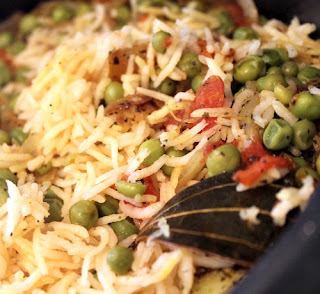 I'm sending this post to MLLA 56. MLLA is a blog event that stands for "My Legume Love Affair" and it celebrates the use of legumes in cooking and baking, as you might have guessed. Susan, the Well-Seasoned Cook started this event and has been running it for years, and this month Lisa takes over- congratulations and good luck, Lisa. Check out the archives for thousands of fresh ideas for using legumes.
Posted by Nupur at 6:59 PM